This week ended up being a little busier than I expected – I had to make that quick transition from wedding/honeymoon to beginning to prepare for my field/labwork coming up in July. These things, sadly, don’t turn on a dime anymore. So, I’ve glossed over a pile of interesting volcanically-related events this week in favor of longer posts, so today I will try to make up for it a bit.

Italy: Now, sometimes I worry that Boris thinks I don’t take Etna seriously enough. It has had a number of explosions and ash emissions over the past few weeks (see below) that didn’t get nary a mention in a post, and for that, I am sorry. If you have missed it, Etna might not be in full eruption but is still putting on a show as this image posted by Dr. Behncke proves. Much like Kilauea, Etna is just such a constant performer that it almost becomes underappreciated (well, by me). 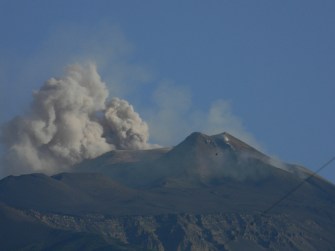 New Zealand: I briefly mentioned this on Twitter, but the fear-mongers in New Zealand are working overtime, trying to convince people that Lyttelton near Christchurch is about to erupt again for the first time in millions of years. They suggest a vast conspiracy to hide the evidence of this “impending activity”, but sadly like many conspiracy, there isn’t any shred of real data to support it. There will be no volcanic eruption near Christchurch – but there is still the threat of earthquakes (and the paranoid fantasies of disaster lovers).

Chile: Speaking of fear-mongering, the media jumped all over the idea that Puyehue-Cordón Caulle (see top left) was “corked” by the new lava flows, invoking the idea that there could be a giant eruption to follow. Sadly, this is again an exaggeration on the part of the media – yes, any blockage might increase the chances of an explosive eruption, but by no means is it something leading to armageddon. Volcanoes erupt and clog all the time, see Soufriere Hills, without creating a devastating explosion. You can read more about this play in the media over at the Volcanism Blog. The ash from the eruption continues to cause problems for aviation in the southern hemisphere.

Philippines: As Chile and Eritrea took over the news, the vigil over Taal was pushed to the backburner. However, there is still rumbling at the restless Philippine caldera, with high carbon dioxide emissions and seismicity and the volcano is still on alert status Level 2. Mayon and Bulusan both appear to be relative quiet, but poor weather (read: rain) will increase the chances of lahars generated from unconsolidated volcanic material near those volcanoes.

Iceland: The NASA Earth Observatory posted a gorgeous image of the new crater lake that has formed at Grimsvötn after the 2011 eruption. The small lake sits in the slightly elongate rift area where the eruption occurred. You can even see half of a small tephra cone on the southern shore of the new lake.

Top left: A webcam capture of activity at Chile’s Puyehue-Cordón Caulle seen on June 22, 2011. Image courtesy of Eruptions reader Kirby – click on the image to see a larger version.

Amid a dearth of female role models in leadership positions in Japan comes one positive move, the government is debating mandatory quotas to get more women into public office.