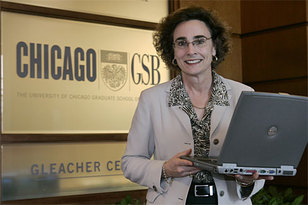 “At one of the world’s top business schools, such slide shows are now an

entrance requirement. In a first, the University of Chicago will begin

slides with their applications this fall.

new requirement is partly an acknowledgment that Microsoft’s

PowerPoint, along with similar but lesser-known programs, have become a

ubiquitous tool in the business world. But Chicago says so-called

“slideware,” if used correctly, also can let students show off a

creative side that might not reveal itself in test scores,

recommendations and even essays.

PowerPoint to its application, Chicago thinks it might attract more

business, and fewer of the technocrat types who sometimes give the

Anyway, whatever you do, please don’t tell Edward Tufte about this little development. Methinks Mr. Tufte wouldn’t be too pleased.

A medical entomologist points to metabolism, body odor, and mindset.
Up Next
Guest Thinkers

The secrets of Swedish innovators

nnIn the most recent edition of its “Serious Innovation” newsletter, Swedish innovation consultancy Idélaboratoriet highlighted the innovation habits of leading-edge Swedish innovators. According to a study prepared by the Royal […]