For the first time, satellites positioned on opposite sides of the sun give us a complete view of the sun’s entire surface and atmosphere. This will allow scientists to observe sunspots for solar flares and magnetic activity on a level previously unavailable to Earth-based observations.

In 2006, NASA launched two near-identical Solar TErrestrial RElations Observatory (STEREO) spacecrafts designed to observe nothing more than the sun and its constant activity such as Coronal Mass Ejections (CME). It wasn’t more than two months after launch that the spacecrafts made their way around the Moon for the classic gravitational slingshot toward the Sun. Now it’s four years later, with STEREO(a) continually advancing ahead and STEREO(b) gradually falling behind. The planned separation of the two spacecrafts has increased our overall perception of the sun like never before.

We see it each day and probably don’t think much of it but from a technical standpoint — In all of human history, we’ve never actually observed it in its entirety. Just recently, both spacecrafts were positioned on diametrically opposite sides that allowed us to start putting together images that were otherwise not available before. Until now, we were only able to observe one side, which left us in doubt about activity taking place on the far side. Just yesterday, NASA finally released the very first cutting edge 360-Degree panoramic view of the sun.

The STEREO spacecrafts will now allow us to maintain an unprecedented and clear view of the Sun’s activity for a period of about eight or so more years. Now we will be able to observe sunspots and magnetic activity on a level previously unavailable to Earth-based observations. One way that scientists track the Sun’s solar cycles is by observing and counting the sunspots. These sunspots are cooler dark areas that are caused by very intense magnetic activity, and with the Sun’s magnetic field being as large as the solar system, it’s a good idea to keep tabs on what it’s up to. In other words, the main thing we have to worry about is the solar flares that erupt near these sunspots.

The number of sunspots that are observed on the surface changes each year with the length of a cycle being about eleven years. This eleven-year cycle is essentially when there is a peak in the number of sunspots which means there is an exponential increase in the magnetic activity. In fact, the magnetic activity becomes so great that the magnetic field (north pole and south pole) of the sun actually flips. When the two magnetic fields are brought together, the direct result of the flip process causes the Sun to release a massive burst of radiation that can reach approximately 6 × 10^25 joules of energy. If these explosions are powerful enough, they can trigger massive CMEs that can hurl a tsunami of solar wind toward the Earth. In fact, the largest geomagnetic storm in human history took place in 1859 and is commonly referred to as the Carrington Event or Carrington Flare. This particular storm knocked out telegraph systems and in some instances actually shocked the telegraph operators. 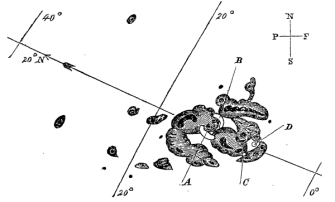 (Above Image) A sketch of the Carrington Flare spotted on September 2, 1859 during the second phase of the Great 1859 Superstorm. (Carrington, 1860) (Credit: Richard Carrington).

Storms as large as the Carrington Event/Flare happen about once every 100 years or so, but I am sure that you could imagine the impact one would have on society today. Think of all the satellites currently in operation that give us GPS, our television streams, even the Internet. National power grids that provide electricity, telecommunications infrastructure and even radar could be wiped out by such a storm. An impact that large today would in a sense be thrown back 100 years and blackouts could last for months in a worst-case scenario. So far we’ve dodged the bullet and we are very young in the space age, but the next cycle will peak around 2012-13. Although chances are high that nothing spectacular will happen, we do have to start thinking about these things and preparing for a solar tsunami. Such preparations should include backup systems and our power grids, satellites and communications infrastructure should have reinforcements and protection to handle these geomagnetic storms.

Another example was the geomagnetic storm that took place in March, 1989. Establishments such as the Salem New Jersey Nuclear Plant sustained major and permanent damage to various GSU Transformers

Katrina should serve as a cautionary tale: The Inevitable, Inevitably Happens. Our lack of preparation before Katrina, despite knowing that it COULD happen demonstrates the perils of this situation. Reports are now being issued by many scientists stating that it’s good to be prudent in case at some point in the future a worst-case scenario such as the Carrington Event takes place.

Reading the Tea Leaves in Yemen

Note: I had one more Egypt dispatch in my notes to post, but as I left the country and bounced around my new (temporary) home events on the ground have […]