PC World cried out two years ago – Are Baby Boomers Killing Facebook and Twitter? Younger users were described as losing their digitalplayground to commercialization and (evenworse) to their parents. So, where are we now? Has new media lost its youth?

Associate Editor of Atlantic Magazine, Nicholas Jackson providesa look at the numbers. In his article Facebook vs. Twitter: Comparing Social Demographics Jackson notes the differences between the two social media giants.Jackson draws upon a rich dataset presented as an infographic based upon a Barracuda Networks survey with analysis by Razorfish, Digital Surgeons. Among the data are age andeducation. ‘Facebookers’ (no real surprise here) tend to be younger than‘Tweeters’. Yet, we do know that the number of older consumers, particularlyboomer women, going onto Facebook has been growing quickly.

Below is a summary of the age demographics on the two leading social media platforms. 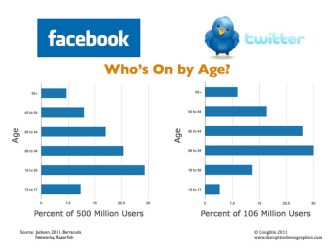 Related
Starts With A Bang
Ask Ethan: Do my atoms really “touch” each other?
When you bring two fingers together, you can feel them “touch” each other. But are your atoms really touching, and if so, how?
13.8
Why the origin of life and the Universe itself might be forever unknowable
There might be a hard limit to our knowledge of the Universe.
Hard Science
200 years of exploring Antarctica
What we’ve learning from the world’s coldest, most forbidding, and most peaceful continent.
Sponsored
4 misleading personal finance tips
Personal finance advice is often over-simplified and fails to consider economic research or people’s unique circumstances.
Strange Maps
Europe’s stunning digital divide, in one map
Some Europeans really don’t want to use the internet.
Up Next
Guest Thinkers
Navigating Longevity: Managing Complexity & the New Future of Financial Advice
Old age is not what it used to be.  Pensions were defined and assured. Not for all, but the ‘dream’ of retirement was a sunny day at the beach. The […]