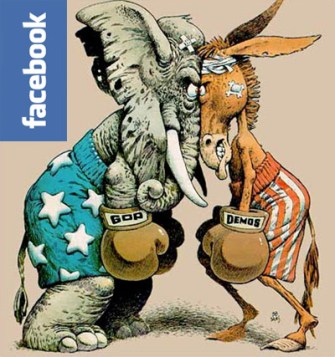 If you are on Facebook, you have probably grown annoyed by the many causes and appeals that show up in your Notifications on a daily, if not, hourly basis. Like any new information technology, Facebook has generated a fair share of hype over its potential to “revolutionize” citizen participation and to ignite support for social causes. But like previous information technologies–ranging from the radio to the Internet–this initial hype is now starting to be replaced by a sense of realism about what Facebook “click through activism” can and cannot do.

Obviously, there’s little doubt that online activism has had a major impact in politics and social campaigns, yet these online channels often simply reinforce or amplify “real world” connections and contacts. Appeals that are exclusively Internet-based, without complements from traditional media or real-word contexts, are unlikely to generate meaningful participation and citizen activity. Obama’s presidential campaign, for example, generated accolades for their innovative use of social media and online tools, but as many of the campaign organizers have since said, it was the on-the-ground organizing that really made a difference, with the social media campaign a way to bolster these traditional strategies. Social media was revolutionary as a fundraising tool, but it was on-the-ground organizing that mobilized volunteers and voter turn-out.

With one provocative twist, the Obama case resonates with the key findings that my colleague Dietram Scheufele and I turned up in a series of studies published earlier this decade. In our analysis of nationally-representative survey data, in comparison to traditional newspaper reading and “real world” political discussion, online media use had limited impacts on learning and on actual political participation. Perhaps worse, despite limited gains in knowledge and actual participation, heavier online media users were more likely to believe that they were making a difference in politics. As we concluded, this “false sense of participation” among heavier online users may actually distract them from outlets for real-world interaction and participation where they could make a difference.

In today’s Washington Post, an article explores this very tendency among heavier Facebook users. When you go beyond the hype–as several experts comment in the article–you find that instead of a revolution, Facebook should be considered just another tool for complementing real world organizing and traditional media channels:

“Click-through activism” is the term used by Chris Csikszentmihályi, the co-director of MIT’s Center for Future Civic Media to describe the participants who might excitedly flit into an online group and then flutter away to something else. In some ways, he says, the ease of the medium “reminds me of dispensations the Catholic Church used to give.” Worst-case scenario: If people feel they are doing good just by joining something — or clicking on one of those become a fan of Audi and the company will offset your carbon emissions campaigns, “to what extent are you removing just enough pressure that they’re not going to carry on the spark” in real life?

The potential distraction of click-through activism has a lot of relevance for thinking about public engagement on science issues such as climate change. As we wrote in the recent article at Nature Biotechnology (PDF, news release), there is great potential in science-related blogging but beyond the hype, the limitations of blogs need to be kept in mind, the greatest limitation being their strongly self-selected audience. There should also be concern about the amount of time that bloggers and their commenters spend self-referencing (and sometimes bickering) with each other on issues such as climate change and if this activity could be better channeled in other ways. Beyond this time displacement element, in other cases, such as the George Will Affair, this online mobilization can backfire.

Moreover, as my co-author John Kotcher and I concluded in a recent paper published at the journal Science Communication, any efforts such as the We campaign’s online initiative to mobilize opinion leaders around climate change should be a complement to a heavy focus on real world recruitment, training, and connections.

Nature on the Future of Science Journalism

Timed with the World Federation of Science Journalists meeting in London, Nature magazine has put together a selection of recent articles focusing on journalism and science communication. The selection includes […]