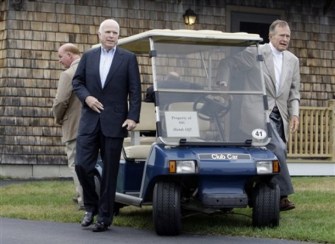 In his first major negative ad of the campaign, Obama is defining McCain as out of touch with Americans’ economic woes. Obama is seizing on McCain’s gaffe yesterday when he stumbled over a question about how many homes he owns. “I think — I’ll have my staff get to you,” McCain told the reporter. “It’s condominiums where — I’ll have them get to you.” (Either seven or eight homes, depending on reports.) (Wpost).

The Obama strategy is to define McCain as a wealthy elitist so removed from the day-to-day financial concerns of Americans that he isn’t fit to lead the country out of economic trouble. (Watch Obama’s remarks from a speech yesterday.)

McCain’s mistake is similar to George H.W. Bush’s error in 1992, when he appeared in a campaign stop to be completely unfamiliar with a grocery scanner. It also matches this key moment in the clip below where the former president stumbles when asked at a town hall meeting debate how the economic recession has affected him personally. (Chris Cillizza has a run down on similar moments from past campaigns.)

In comparing the poll numbers, Obama appears to score higher than McCain when it comes to perceptions of empathy and someone to relate to but McCain scores higher when it comes to the perception of shared values and identity. (The Wpost has a comparison on the numbers.)

In short, the Obama campaign can learn lessons from past elections, especially the strategies of the 1992 Clinton campaign. Much like McCain may model ads and campaign rhetoric from previous GOP efforts to prime national security, Obama can take advantage of Clinton’s 1992 themes in turning the issue of the economy against McCain.

The “house” gaffe might not be enough to jump start this dominant perception of McCain, but any future similar moments and mistakes will go a long way to reinforcing this impression, and you can bet the Obama campaign will be waiting.

Gore at the Democratic Convention: Does He Send Mixed Messages about Climate Change and Partisanship?

One image of Gore: A partisan activist and leader.CNN reports this afternoon that Al Gore will have a major speaking slot at the Democratic convention, joining Obama on stage the […]