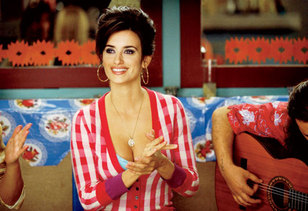 You can throw away your books from Tom Peters and Malcolm Gladwell right about now and start loading up on movie DVDs. As BBC News recently pointed out, a quartet of Italian management consultants have decided that there’s more that business executives can learn from films than from traditional business books:

“In a new book, Cinema for Managers, the four consultants

highlight major issues. Editor Francesco Bogliari says all good films teach lessons about behavior. Stephen Spielberg’s The Terminal and Pedro Almodovar’s film Volver are among those singled out by the authors…

Among the films on the consultants’ list is Volver, the

Themes like innovation and courage and teamwork are an important part of these films. That much I buy into. However, the Italian management consultants had to muck things up by highlighting Stanley Kubrick’s controversial 1962 film Lolita for its “lessons about seduction and betrayal” — lessons that the business gurus claim “might be useful for

investing on the stock market.” Somehow, I don’t think Wall Street hedge fund managers are sitting down for a screening of “Lolita”; instead, they are reading books like The Black Swan and The Little Book That Beats the Market.