The week buzzed by … and we actually end with a bang (albeit a cloudy one).

Dr. Boris Behncke brings us news that Etna seemed to have another eruption, however unlike the events of January 12-13 of this year (top left), these events have been obscured by clouds on the volcano. However, there are plenty of other signs that the volcano is active, including strong seismicity and evidence of hot pyroclastic material. All of this is happening in the Southeast Crater Cone. Here is the description from the latest INGV update on the events of this morning:

“Simultaneously with the onset of Strombolian activity, the INGV-Catania seismic network on Etna recorded a rapid increase in the volcanic tremor amplitude, which continued until about 14:30 GMT and then started to decline sharply. A lava flow descended eastward, following the same path as that of the 12-13 January paroxysm, in the direction of the Valle del Bove. Ash falls were reported from the Linguaglossa area on the northeast flank of the volcano in the morning, and later, as wind directions changed, on the western flank around Bronte.”

This new INGV post also mentions some explosive activity at Stromboli as well (see a IR webcam capture below), so it is a busy time for the Aeolian volcanoes. If you’ve ever wanted a peak at what the control room at INGV-Catania looks like during an Etna eruption, check out the annotated image that Dr. Behncke has posted – if you scroll over the image you can see what many of the monitors are showing and what events were going on when the image was shot today. Hopefully the weather will clear out soon so we can see the products of this new activity (which seems to be calming down as Italy enters the evening), but until then, you can follow Dr. Behncke on Twitter for the latest and keep your eyes on one of the many Etna webcams (hopefully) to catch a glimpse of the action. 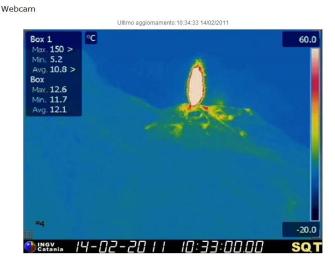 IR webcam capture of an explosion at Stromboli on February 14, 2011 by Eruptions reader Thomas Wipf.

The real challenge for Internet freedom? U.S. hypocrisy. And there’s no app for that. Secretary Clinton’s speech on Internet freedom didn’t address the U.S. and Internet oppression.