It has been a while since we’ve had what I would consider a “busy” Global Volcanism Program Weekly Volcanic Activity Report – but this week, there is a ton of new information about some of the volcanic rumblings around the globe, including some at a volcano that is new to Eruptions.

So, let’s look at some highlights:

Ecuador: Everyone is still watching Tungurahua, where a new period of intense explosive activity has begun. In fact, both the NASA Earth Observatory and National Geographic have images of the eruption, albeit from very different vantage points. The NASA EO image shows the brown-tan plume of the volcano mixing with the white clouds over the volcano, while the National Geographic images capture the eruption – and the recovery – from a more terrestrial location. The current eruption at Tungurahua is the largest since 1999 (spanish) and some of the towns near the volcano have seen over 15.5 mm of ash fall since the activity began – totaling an estimated 1.6-3 million m3 of tephra, according to the Instituto Geofísico.

Indonesia: A volcano that hasn’t been in the news lately in Indonesia appears to be showing signs of restlessness, namely Gamkonora. This is amusing because just yesterday I was looking at my IAVCEI Volcanoes calendar and noticed an anniversary coming up this week of a 1673 eruption of the same volcano and I thought “I haven’t heard much of Gamkonora lately”. Ask and ye shall receive, eh? Anyway, Gamkonora is on Halmahera and is part of a larger caldera system. Interestingly, the GVP reports that it last erupted in 2007, but obviously with little fanfare (except these NASA and ESA images – see below). Most of the previous eruptions over the last few hundred years have been VEI 1-2 (small), but the 1673 eruption is estimated to be a VEI 5 (and produced a tsunami), so the potential is there. The latest report from Gamkonora mentions white plumes coming from the summit and a sulfurous odor, prompting an elevation of the alert status to 2. Indonesia is still recovering from its last major eruption at Merapi, with the government taking charge to move people displaced by the eruption to safer, permanent homes. 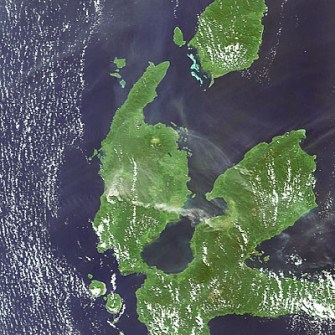 Kamchatka: As always, the far eastern Russian Peninsula is in the news for volcanic activity. Shiveluch and Kizimen (see below) have both been producing moderate ash plumes that have reached 6 km / ~20,000 feet, while Karymsky has been erupting slightly smaller plumes (for Kamchatka) In a fun bit of poor copy editing, Bernama reported that the volcanic plume from Kizimen towered to “six meters”. Ah, how the incorrect prefix can really change the severity of an event.

Vesuvius: Okay, there is no update on Vesuvius in the GVP Report. However, the internet was crawling with information on the new Hollywood version of the 79 A.D. eruption that destroyed Pompeii. The film, which will be directed by Paul W.S. Anderson (yes, he who brought us “Resident Evil”). Anderson says “like “Titanic,” the Pompeii film will be anchored by a strong love story.” I’m not holding my breath, but with this and the upcoming BBC’s Atlantis(about the eruption of Thera on Santorini), it seems like volcanic disasters are making a comeback in film (for better or worse).

Check out the full GVP report for all the details from the rest of the world!

So here’s a ferocious attack on new atheist Sam Harris from the Nation, our country’s leading leftist publication.  The conclusion:Harris is oblivious to this moral crisis [of selfish individualism]. His self-confidence is […]