We talk a lot about the hazards that are present at Washington’s Rainier mostly in terms of what might happen if the volcano erupts. However, remember that even when Rainier is showing no signs of activity, volcanic hazards can still be present (video). Case in point is the debris flow that occurred on Rainier last week. TheLandslide Blog posted an excellent video of the June 25 event that seems to start as a debris avalanche/landslide but as the flow runs down the slopes of the volcano, some parts begin to appear lahar-like as meltwater from the snow, ice and glaciers on the volcano is incorporated into the flow itself. This footage is pretty spectacular as you can see the dust portion of the flow get left behind from the faster moving ground debris that runs out downslope. (And for those of you who might be curious, that initial part of the avalanche is as close to what a pyroclastic flow on Rainier might look like if you were near the summit). 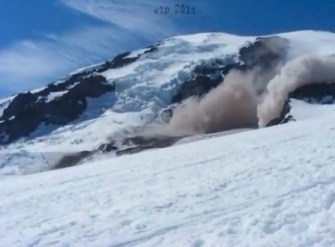 Rainier has a long history of lahars (see map below), many of which are not related to volcanism  – they are mostly glacially-derived meltwater releases that pick up debris along the way. This is why the volcano has a sophisticated lahar-warning system installed on the volcano as part of the hazard mitigation on the volcano because these types of lahars can occur with little-to-no warning. The lahar warning system utilizes sirens to warn the towns downvalley from Rainier that a lahar has been detected and to move to higher ground. Most of the town would have ~40 minutes (or more) to move people to safety (out of the river valleys) if a lahar is detected on the main edifice of Rainier. Usually flows like this are caused by heavy rains or melting, which prompts the collection and then release of water high on the slopes of the volcano. Rainier is also a very unstable volcano as much of the summit area has been extensively hydrothermally altered (pdf), so it is not surprising to see lahars and avalanches such as these on the volcano.

Lahar/mudflow inundation of the Rainier area over the last 5,600 years. Image courtesy of the USGS.

Just a reminder that volcanoes are hazardous even if they haven’t erupted in over a century.

This scientist collected thousands of secrets. They all had 3 things in common.
▸
7 min
—
with
Michael Slepian
Up Next
Culture & Religion

Lose the Marriage, Keep the House

I feel badly for a couple I know who have recently divorced after several decades of marriage but are still bound together by the family home that they cannot sell. […]