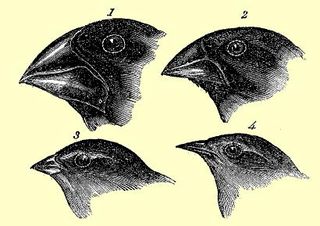 So many business terms that we take for granted – like “survival of the fittest” – are actually based on Charles Darwin’s seminal work on the ways that species adapt to their environment in the wild — and the way these adaptations are handed down to their progeny. So it’s always fun when other innovation bloggers combine smart thinking about corporate innovation with insights about Darwinian evolution. Here, Michael E. Driscoll of Dataspora asks What Can Darwin’s Finches Tell Us About the Downturn?

“Newspaper articles paint the markets in metaphors
like “difficult climate” and “harsh landscape” –but these clichéd
phrases have a kernel of truth. Thinking about markets as natural
environments reveals that selective forces are at work. But it also
predicts when they work.  In the natural world, as the story
of Darwin’s finches tells us, selection acts in times of crisis:
drought, famine, and disease.  For our markets, that time is now.”

As Driscoll points out, companies can learn a lot about how to survive the current downturn by looking to the example of Darwin’s finches on the Galapagos Islands. During the wet seasons, it was hard to see how a finch’s beak made any difference to its fitness. However, when the rainy season brought no rain, they found that drought became the determining factor that shaped the survivors of the species:

“They found fewer than two hundred finches alive on the island.Just
one finch in seven had made it through the drought… The average beak
before the drought was 10.68 millimeters long and 9.42 deep.The average beak of the fortis that survived was 11.07 millimeters long and 9.96 deep… The birds were not simply magnified by the drought:they were reformed and revised.They were changed by their dead.Their beaks were carved by their losses.”

In the same way, the benefits of having the right innovation processes in place are often masked during good times. “Firms with both new and old technologies remain solidly profitable, happily hopping along... But when hard times hit, innovators survive.More importantly, they flourish when the business cycle swings up again... But like
Darwin’s finches, the survivors are not just those who have more
technology investments, but those who get the dimensions right.” At the end of the day, downturns are not only good for innovation, they
are necessary.