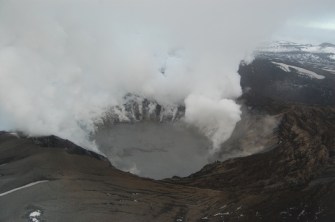 nThe crater lake at Eyjafjallajökull as seen on June 11, 2010. Image from the Icelandic Met Office by Sveinn Brynjólfsson.

After keeping us transfixed for almost two months this spring, Eyjafjallajökull has slowly drifted from the headlines. However, this doesn’t mean that interesting things – volcanologically-speaking – have stopped happening at the Icelandic volcano. For one, a crater lake has now been spotted at the summit vent of the volcano. This lake is steaming vigorous, but at the end of last week, the Icelandic Meteorological Office and the Institute of Earth Sciences declared that no magma is interacting with the crater lake – only steaming from the hot rocks surrounding this small (and likely ephemeral) body of water. The lake is only about 300 meters across (see above) and has a steam plume rising from it that can reach upwards of 1000 meters.

The volcano itself is pretty quiet – only steaming and the very rare phreatic explosions due to water flashing to steam near the hot vent. However, a lot of the loose, unconsolidated sediment produced by the two months of explosive eruptions at Eyjafjallajökull mean that heavy rain can remobilize that material, producing lahars (which do not need to be triggered by an eruption – they only need to be made from volcanic material). These lahars not only bring sediment and water downstream that can cause damage to property (and kill people if they have not been evacuated) but the shallowing of river beds means that flooding by simple river discharge is more likely as well. This is a problem that the area around the volcano will likely face in the coming months.

There have also been some interesting ramifications of the eruption. For one, Icelanders are finding uses for the copious ash produced in the eruption, such as reinforcement for concrete. The Romans used ash to help make building materials and it allows for lighter, stronger concrete. However, the lack of activity at the volcano also means that tourism to Iceland has dropped as the summer arrives – I suppose people only want to see a volcano at its best (or the fact that people have a short attention span).

Possible eruption at Gorely in Russia?

There are some reports of an eruption at Gorely in Kamchatka – but details are scarce.