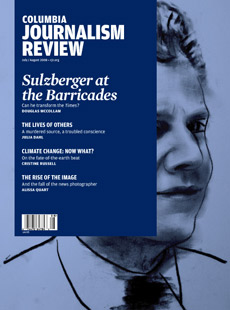 In the latest issue of the Columbia Journalism Review, Harvard University’s Cristine Russell contributes an important analysis on the next stage in climate change media coverage. She spotlights reporters such as the NY Times’ Andrew Revkin who are among an “advanced guard” of journalists who are figuring out how to strategically frame coverage of climate change in ways that resonate with new audiences and across a diversity of media platforms.

“Climate change will require thoughtful leadership and coordination at news organizations,” asserts Russell. “Editors will need to integrate the specialty environment, energy, and science reporters with other beats that have a piece of the story–everything from local and national politics to foreign affairs, business, technology, health, urban affairs, agriculture, transportation, law, architecture, religion, consumer news, gardening, travel, and sports.”

Veteran journalists that Russell interviews in the article include Bud Ward of the Yale Climate Media Forum and Charlie Petit of the Knight Science Journalism Tracker. She also interviews science policy experts such as Stanford’s Stephen Schneider along with Harvard’s Daniel Schrag and John Holdren.

In the article, Russell even turns to me for a few insights and I am happy to say I was able to provide a quote that reinforces her lede and central argument:

And Matthew C. Nisbet, an American University communications professor, says, “We have had more science coverage on climate change than at any time in history. The next challenge is to find ways to cover the story across news beats and in ways that engage new readers.”

Later in the article, I talk about the important frame shift that has happened since the release of Inconvenient Truth. (For more, see this past blog post.)

Nisbet, for one, sees a dramatic shift in media rhetoric on climate change. In the spring of 2006, fear was at the heart of Al Gore’s documentary film, An Inconvenient Truth, which jump-started media coverage of global warming after years on the back burner. Suddenly, climate change–that term is gaining ground over global warming, by the way–was on front pages and magazine covers, including Time’s iconic image of a lone polar bear and the warning, “Be Worried. Be Very Worried.”

Today, says Nisbet, “the underlying appeal is a moral message: ‘We’re all in this together.’ It’s a moral call to arms.” Gore’s new $300-million “We” media campaign seeks to cross the partisan divide with the optimistic motto: “We Can Solve It.” The cover of Time’s Spring 2008 environment issue, bordered in green instead of Time’s customary red, took the famous World War II photo of Marines raising a U.S. flag on Iwo Jima and substituted a tree to illustrate its bold headline: “How to Win the War on Global Warming.”

As a side bar to the article, Russell and CJR staffers put together a definitive list of the top Web resources for journalists reporting on climate change. Here’s what CJR has to say about Framing Science.

As I’ve argued before, conservatives often have the advantage in elections and policy battles because of their tendency to enforce greater message discipline and coordination. The latest example is James […]