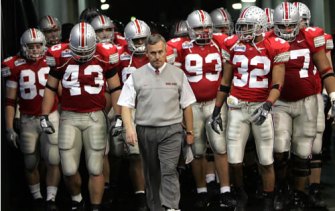 After spending the past three years on the faculty at Ohio State, I remain ambivalent about the vast commercialization and big time money pouring into college athletics. Of course, it will all be on stage tonight as OSU takes on Florida in the BCS championship game.

As USA Today spotlighted last Friday in a front page cover story, Ohio State outspends every university in the country on athletics, and football obviously is the cash cow. One can raise eyebrows about the $2 million-a-year salary for Jim Tressel, express doubts about whether you want the football coach to the be national face and personality of your university, or debate the football culture that permeates every stone and brick of the campus. Yet the OSU athletics department, despite its bloated $100 million dollar budget, is self-sustaining, paying off its debts while even turning a profit last year with $105 million in revenue.

Meanwhile, the athletic program has contributed $1.1 million yearly into the school’s general fund, offsetting at least marginally state funding cuts. And it has pledged $5 million over five years to the Ohio State library. So at least a paltry 1% of annual athletics revenue is going back to the school.

Yet what does big time professional sports do to university culture? Gameday binge drinking in parking garages, idol worship of student peers, and the occasional campus riot are just the most manifest indicators. 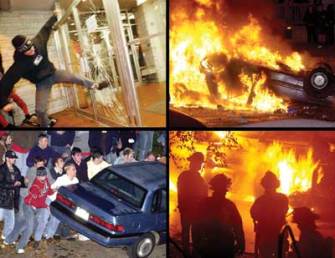 Universities are supposed to be principally about educational pursuits, but sometimes its hard to know it when you consider the athletic apparatus at a place like Ohio State or Florida. Imagine if the money channelled into athletics could be put into student scholarships, endowed research chairs, faculty salaries, libraries, and research facilities? Academically, would OSU rather be Florida or Alabama, or does it want to be Berkeley?

It all adds up to a lot of misplaced time, focus, and values. Consider this quote from the USA Today article:

“What is happening there is probably the most prominent demonstration of what is pervading I-A intercollegiate sports all over the country,” says William Friday, president emeritus of the University of North Carolina and former co-chairman of the watchdog Knight Commission on Intercollegiate Athletics. “We’re spending excessively on facilities. We’re paying far too much for salaries. We’re allowing (TV) networks to be too directive of when we play, what days and what hour we play. We’re out of control.”

And now it appears even the newly elected Congress, despite an ambitious first 100 hour agenda is taking a break to celebrate college football, with its many members from Florida and Ohio probably lost at fundraising parties somewhere in Arizona. Consider this quip from the Drudge Report today:

Democrats ran to expand the work week in the House to 5 days. But guess how long that lasted? Not even one week! “Culture Shock on Capitol Hill: House to Work 5 Days a Week” front-paged the WASHINGTON POST in December. Majority leader Steny Hoyer said members of the House will be expected in the Capitol for votes each week by 6:30 p.m. Monday and will finish their business about 2 p.m. Friday. Explained the POST: “Forget the minimum wage. Or outsourcing jobs overseas. The labor issue most on the minds of members of Congress yesterday was their own: They will have to work five days a week starting in January.” But on the morning after the night before, on the first full week of the new congress, Hoyer has pulled back from his vow! A Hoyer press release obtained by the DRUDGE REPORT boldly declares: “Monday, January 8, 2007: The House is not in session.” Hill sources claim The House is taking Monday ‘off’ this week, because of the championship football game between Ohio State and the University of Florida. And, of course, the following Monday is the Martin Luther King Jr. holiday. 100 hours…starting…soon…Developing…

Finally, there’s the question of why in an era of increasing Federal budget deficits, with so much money changing hands, why we aren’t taxing athletic departments. Given Congress’ football distraction, speculation that members might start to dig into the question remains doubtful. Over the weekend at the NY Times, Andrew Zimbalist had these worthy observations, prompted by Nick Saban’s new $32 million contract to be football coach at Alabama:

Never mind that the presidents of large public universities generally have compensation packages of $200,000 to $700,000. Never mind that paying the football coach 5 to 15 times more than the college president (and many times more than the professors) sends a strange message to the student body about the institution’s priorities. Never mind that Article I of the N.C.A.A. Constitution affirms that academics have primacy over athletics. The market demands it. What kind of a skewed market makes these demands? First, the players are not allowed to be compensated. Instead, the coaches walk off with the value produced by the “student-athletes.” Second, athletic departments have no shareholders who seek dividends or increases in stock value through higher reported profits. That is, these departments face no market pressure to turn a profit. Money finds a way to be spent in such a circumstance and costs bloat. Third, athletic departments benefit from privileged tax treatment. Perhaps most notably, boosters can give money to the program and procure the privilege of buying some choice seats on the 50-yard line. Tax laws allow a booster to deduct 80 percent of such a donation, which in practice is little more than a personal seat license. Fourth, it is in athletic directors’ self-interest to up the ante on coaches’ compensation. Their worth increases along with their coaches’ pay.

We have two descriptions of the Universe that work perfectly well: General Relativity and quantum physics. Too bad they don’t work together.
Up Next
Guest Thinkers