Before we get into the news about all the activity in Indonesia, I did want to point out a couple of articles about the connection between earthquakes and volcanoes. After the Sendai earthquake, there has been a lot of talk about the matter, especially concerning Mt. Fuji, but most volcanologists think that you need a volcano already very close to eruption for an earthquake to trigger a new eruption … and remember, a volcano “close to eruption” should be showing other signs, such as seismicity, gas emissions, deformation and the like. Check out the pieces in the LA Times and on Magma Cum Laude for more on the earthquake-volcano connection (or lack thereof).

Let’s catch up on the volcano news from the weekend:

Two volcanoes were causing problems in Indonesia over the weekend. The first, Merapi, was generating lahars/mudflows due to heavy precipitation in the area. This remobilizes the ash/tephra deposited during the activity at the volcano over the last 6 months. The media reports like to call these “cold lava floods“, but there is no molten lava involved – merely a slurry of volcanic debris and water. People who have survived lahars do sometimes report that the flow “burns”, but this sensation is likely due to the slightly acidic nature of some lahars rather than thermal burns. These new lahars from Merapi buried 21 homes near the volcano, also killing some livestock but luckily no human fatalities. Some of the mudflows made it as far as Yogjakarta (see top left). Interestingly, the Indonesian government has had to crack down on illegal climbing of Merapi, which is still off limits due to the chance of a new eruption or mudflow. 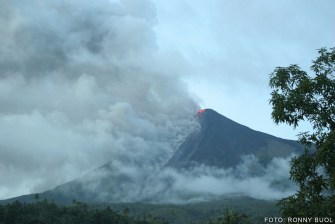 The other Indonesian volcano making news is Karangetang, but unlike Merapi, this volcano is actually erupting. Explosions and pyroclastic flows from Karangetang have prompted the evacuation of over 1,200 people so far and the activity has damaged a number of buildings near the volcano. There are some stories talking about 40 people being trapped on the volcano by “two rivers of lava” – I’m not entirely sure what they mean, whether it is actually lava or rather pyroclastic flows moving down valleys – but it is unknown whether these people are still alive. Images of the activity (see above) clearing show pyroclastic flows, likely generated by collapsing dome material being extruded at the summit. The alert status at Karangetang is at red, the highest level.

So you may have noticed I haven’t posted on any movies lately. That’s because I haven’t seen any I liked or hated enough to talk about.  I did just see […]