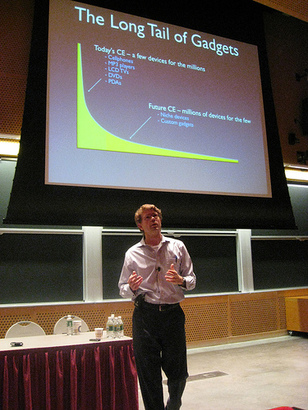 nEarlier in the week, I had the unique opportunity to hear Peter Semmelhack, CEO of New York-based Bug Labs, describe how his start-up company was radically disrupting the traditional consumer electronics industry. Using a modular, open source approach, Bug Labs is focused on bringing the Long Tail of Gadgets to everyday consumers. Instead of developing a few devices for millions of consumers, the business model is to make millions of devices available for relatively few numbers of consumers. His company has already generated buzz on gadget blogs like Gizmodo, and now Bug Labs is featured in this week’s issue of Springwise:nn

“For a while now, web developers have been mixing and matching webnservices such as Google Earth and Yahoo Weather to create mash-ups thatnperform useful new functions. Likewise, programmers have grown adept atntweaking the code used by open-source software programs. The result innboth instances has been unique applications the developers of thenoriginal technology likely never dreamed of. nn

US start-up Bug Labs wants tonharness some of that same creativity by enabling tech-savvyndo-it-yourselfers to create their own mobile devices. The company hasndesigned several basic hardware modules that snap together likenbuilding blocks to perform whatever mobile function their owners cannthink of. â€œThere are so many great gadget ideas that haven’t beennthought of yet,â€ the founders note. â€œWe want to unlock and inspire thendiscovery and creation of as many of these devices as possible.â€nBesides letting them add whatever they want, the snap-togetherncomponents also let consumers leave out what they don’t want, which isna far cry from many pre-packaged mobile phones and PDAs that comencrammed with features their buyers have no use for.”

By the end of 2007, at least a few of the modules should be available for sale. According to Semmelhack, the plan is to make the modules available online first, before extending availability to big box retailers like Best Buy sometime in 2008. If you check out the Bug Labs website, you’re probably thinking, “Wow, those products doesn’t look at all like a phone or camera that I own.” That’s the whole point. As Springwise points out, “Gadgets built with Bug Lab’s block-like components may not satisfynthose who lust after branded mobile devices poured into seamlesslynsleek designs. It will, however, appeal to people who enjoy makingnthings, and like having control over elements of a product’€™s design.”

This is a company to watch. Mad props to Peter and team at Bug Labs!

[image: Peter Semmelhack and The Long Tail of Gadgets]

The company that went bankrupt on Christmas Eve

Over the past few years, one of the most interesting innovations in the airline industry has been the growth & expansion of the “business class only” travel segment for service […]