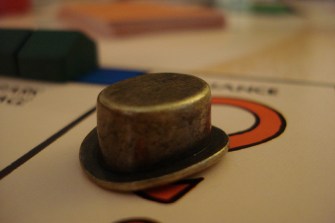 Oil giant BP announced a new plan to staunch the high-pressure oil geyser befouling the Gulf of Mexico, they call it the Top Hat. The Top Hat is a slightly smaller version of 100-ton steel and concrete box BP tried to lower onto the ruined, gushing wellhead. Unfortunately, buoyant methane crystals formed inside the box, preventing it from settling on the seabed. “I wouldn’t say it’s failed yet,” BP chief operating officer Doug Suttles said after last weekend’s failed attempt. “What I would say is what we attempted to do … didn’t work.” Undaunted, BP has equipped the Top Hat with antifreeze dispensers. If that doesn’t work, BP plans to deploy The Thimble, The Shoe, The Iron, The Wheelbarrow, or the Giant Bag of Money.

Tomorrow, executives from BP, Transocean, and Halliburton will attempt to explain themselves before a U.S. Senate committee investigating the disaster on the Deepwater Horizon. The cause of the accident has yet to be determined and all parties are furiously shifting blame. Testimony released ahead of tomorrow’s hearing hints at the positions the parties are staking out. BP blames Halliburton’s shoddy cement job and seeks to remind everyone that Transocean owned the blowout protector that failed at the crucial moment. Transocean and Halliburton will insist that BP was ultimately responsible for the operations of the Deepwater Horizon.

Meanwhile, the wrecked well continues to gush 210,000 barrels gallons of oil into the Gulf of Mexico each day.

While Matt Gross writes a column called the Frugal Traveler for the New York Times, it doesn’t mean he keeps to a strict budget when he’s on the road. To […]