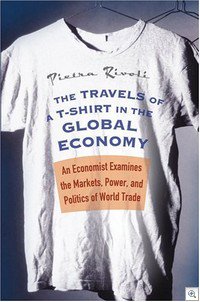 I just finished reading The Travels of a T-Shirt in the Global Economy by Dr. Pietra Rivoli, Professor of Economics at Georgetown University. It was quite an interesting book. Here are some things that I learned:

This book took a while to pick up steam but overall I thought it was well worth the read. If you decide to pick up a copy, happy reading!

I give this one 3 highlighters.

Related
The Present
How heat pumps of the 1800s are becoming the technology of the future
Innovative thinking has done away with problems that long dogged the electric devices — and both scientists and environmentalists are excited about the possibilities.
Starts With A Bang
JWST’s hunt for most distant galaxies gets double boost
Along with gravitational lensing and ALMA’s incredible long-wavelength spectroscopy, JWST is reshaping our view of the early Universe.
Thinking
Finding your essential self: the ancient philosophy of Zhuangzi explained
Adopting a healthy scepticism towards inherited ideas means “emptying the container of the Self.”
The Future
Startup’s bladeless flying car is designed to reach Mach 0.8
One of Jetoptera’s VTOLs is expected to reach speeds of around 614 mph, about as fast as a commercial jet airliner.
Health
New blood types are often discovered following medical disasters
New blood types are regularly discovered by an unusual absence or an unusual presence — both of which can result in tragedy.
Up Next
Guest Thinkers
4 Guys Talking – May 26 guest, Chuck Heinlein
Chuck Heinlein, Director of the Leadership Center for 21st Century Schools at the West Virginia Department of Education, will be our guest tomorrow on the 4 Guys Talking podcast. Chuck […]