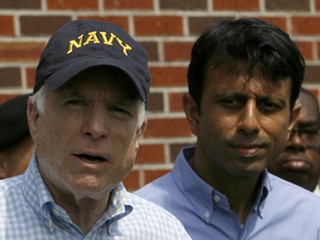 Similar to Sarah Palin, Bobby Jindal was heralded by conservatives as offering the belief credentials to be Vice President.

Louisiana Governor Bobby Jindal was interviewed by the Sunday NY Times magazine. In yesterday’s edition, here’s what he said about his support for teaching creationism in public schools:

Did you always want to be in politics? It was not something I anticipated doing. I always thought I’d go to medical school. I got accepted into medical school and did not end up going.

Where were you accepted? At Harvard.

Wow. Why would someone with so much knowledge of biology sign a bill allowing the biblical story of Creation to be taught in science class? I don’t think that schools should be run by bureaucrats. I think these decisions need to be made by local school boards. In terms of teaching my own kids at home, I do believe there is a Creator. Catholicism doesn’t teach authoritatively on evolution or the origins of life, but we do believe that God is our Creator.