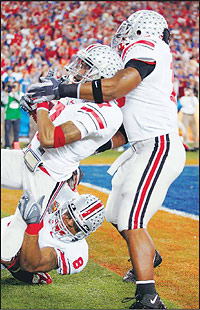 Despite my misgivings about the vast commercialization of college athletics, and its impact on university culture, I did tune in to at least parts of Monday night’s BCS championship game. Just in case you were one of the 20 million or so viewers wondering how star OSU receiver Ted Ginn might have injured his ankle after returning the opening kickoff 95 yards for a touchdown…the picture above, captured by the Columbus Dispatch, tells it all, and the paper has the scoop here. Consider this the “soft journalism” post of the week.