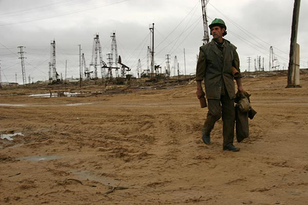 Obviously spooked by the prospect that Americans might finally embrace alternative energy sources like ethanol, the oil industry is mounting a massive PR campaign based around “innovation” to get out in front of the issue. Much as British Petroleum changed its name to BP (“Beyond Petroleum”) in an effort to change its public image, Big Oil is trying to convince people that it has been spending millions upon millions of dollars on R&D work related to alternative energy:

“When some of the industry’s top executives gather in Houston

fossil fuels — will dominate the discussion. And, as the year progresses, expect to see industry leaders —

including the chiefs of ConocoPhillips and Royal Dutch Shell PLC’s

U.S. division — speaking in cities across America in an

issues and discuss topics such as ethanol and renewable fuels. It’s

also an opportunity for the companies to polish their images.

[…] “There’s never been as much effort going into technological

innovation across the whole energy industry as we’re seeing

Associates, a consultancy, and author of “The Prize,” the

According to the CEO of ConocoPhillips, U.S. oil

companies have invested $11 billion in North America on renewable

and other forms of energy in the past five years. And for that type of commitment to the environment (ahem), they want a role in shaping the future of American energy policy:

to reduce gas consumption “very well motivated,” but he said

industry leaders “want a seat at the table” when state and

federal officials set standards for the use and development of

“We believe very strongly the best way of meeting those metrics

with the resources and plans to meet those, (rather) than have

mandates saying specifically, ‘You have to do it this way and