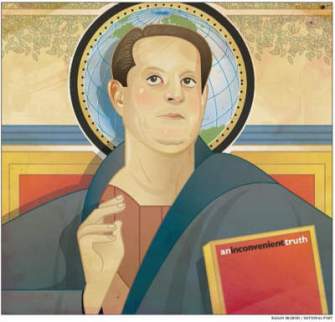 In an editorial in the latest issue of the journal Climatic Change, Simon Donner argues that scientists need to join with religious leaders in communicating the urgency of climate change. Donner is an assistant professor of Geography at the University of British Columbia. His research focuses on climate change, coral reefs, and nutrient cycling.

Following the lead of older avant-garde communicators such as Carl Sagan, Neil deGrasse Tyson and EO Wilson, Donner is one of many among a new generation of scientists who recognize that a paradigm shift is needed for engaging the public. Part of this new paradigm involves collaboration with religious leaders in framing shared common values rather than engaging in a campaign of attacks and insults. More on this paradigm shift in communication will be discussed this February at the panel on the topic at the annual AAAS meetings in Boston.

Here is how Donner powerfully closes his essay:

The true communications challenge facing climate scientists, educators and policy-makers is time. Aggressive reductions in greenhouse gas emissions could need to begin in the next decade to avoid “dangerous anthropogenic interference” in the climate system, like
the collapse of major ice sheets, shifts in ocean circulation and the widespread degradation
of coral reefs (e.g., O’Neill and Oppenheimer 2002). Garnering strong public and political support for any substantial near-term action is requiring society to adapt beliefs held relatively constant for millennia in a matter of years.

This is one example where scientific community may need to work with theologians and philosophers. Many leaders in the Christian, Jewish, Hindu, Buddhist and Islamic community recognize the possible threat posed by human-induced climate change and are actively working to reconcile understanding of climate change with their belief systems (Schut and Barnett 2005).

The influential Christian evangelical movement in the USA recently began a campaign to educate followers about the need for action on climate change (Hagg 2006). Scientists should not be afraid to embrace religious or philosophical initiatives to address the fundamental understanding of the human relationship with the climate. Otherwise, future historians may conclude that a failure to confront questions of belief, rather than questions of economics, explains the failure of our generation to act in time.

AU Students Debate the Internet’s Impact on Society, Part B

This fall in the sophomore-level course I teach on “Communication and Society,” we spent several weeks examining the many ways that individuals and groups are using the internet to alter […]