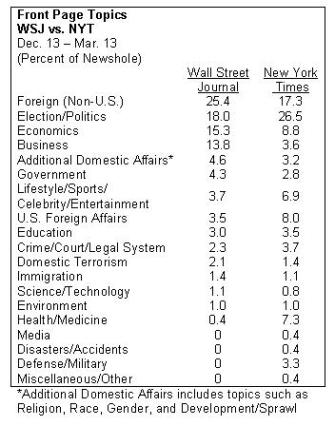 In an analysis released last week, Pew reports that during a three month period (Dec. 13-March 13, 2008), only 2% of front page stories at the New York Times and the Wall Street Journal focused either on the environment or science/technology. The finding is troubling on a number of fronts.

First, the NY Times and the Wall Street Journal are the papers of record for the country. The stories that they run on the front page are typically the lead stories across other news organizations including public radio, weekly magazines, regional newspapers and TV and cable news. If our highest quality news outlets are not drawing audience attention to important news about science or the environment, you can bet other news organizations aren’t either.

Second, as experts at news gathering, we rely on editors and journalists to guide our attention to what they consider to be the most important issues facing society. A vital governing function of the press is to sort through the complexities of the news stream and to alert citizens and policymakers to what’s important in public affairs. As I have detailed in severalstudies, the leading news organizations both shape and reflect the policy agenda. Few decisions in Washington, DC are made that are not at least partially in reaction to news attention.

Yet apparently at the Wall Street Journal and the NY Times, during the three month period analyzed, editors deemed that even coverage of lifestyles, entertainment, and sports were more headline deserving than either science or the environment. Given the absence of front page coverage, is it any wonder that climate change legislation is stalled in Congress or that climate change and other science issues are barely mentioned on the presidential campaign trail? Or that in polls, climate change ranks dead last among 22 issues as a political priority?

The Pew findings are part of an analysis evaluating news coverage at the Wall Street Journal before and after the take over of Rupert Murdoch (see table below). As Pew reports, the single biggest change in front-page coverage occurred with politics and the presidential campaign. Coverage more than tripled, jumping to 18% of the newshole compared with 5% in the four months before the ownership change.

There was also a drop in coverage of the environment from 3% to 1%. It’s difficult to say what prompted this slight shift, though it is most likely attributable to the release of the IPCC reports last year, which jumped attention to the environment slightly above the norm. Further analysis by Pew over the year would better establish a baseline for understanding the proportion of the news hole regularly devoted to the environment or science. 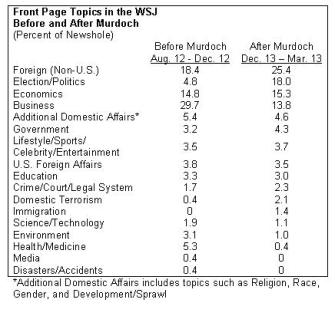 Is This Hillary Ad Really So Negative?

In the wake of Clinton’s victory in Pennsylvania, the NY Times editorialized that Hillary’s campaign team had taken “the low road to victory.” According to the Times, one particular ad […]