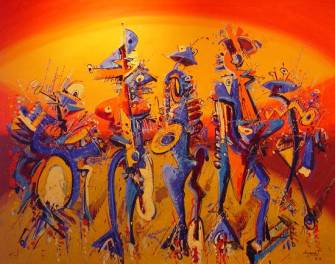 Imagine for the moment a classic work of modern art as pictured above. When a curator takes a heavy and bulky wooden frame, places it around the complex and uncertain image, a viewers’ eyes are drawn to certain dimensions of that painting over others, perhaps leading to a specific interpretation of the artist’s intent or even a specific emotional reaction.

If a second curator replaces that bulky wooden frame with a much lighter metallic one, a viewer’s gaze might be drawn immediately to other aspects of the painting, potentially altering the interpretation of the artist’s intended meaning.

Moreover, based on the expertise of the viewer along with his/her background, one frame might resonate more distinctly than the other. The point is that when a gallery audience is asked to make sense of an uncertain and complex painting, perception will be at least in part both frame and reference dependent. It’s a function of the artist’s image, the chosen frame by the curator, and the predispositions of the viewer.

A similar type of framing occurs during the news production process, on display today as the same story filed by Andrew Revkin was edited very differently at the sister pubs The International Herald Tribune and The NY Times. This framing-by-way-of-editing leads to slightly different interpretations as to the motivations of the Bush administration and how experts are evaluating its new climate plan.

At the International Herald Tribune, the impression is that there might be something worthwhile in the Bush plan. In fact, the headline signals that last week’s initial reaction to the plan might have been too harsh. For its international readership, the article leads with specifics on support from the UN Secretary General Ban Ki Moon, a very strong opinion leader endorsement for that audience. The article closes with comments from Stanford communication professor Jon Krosnick, who implies that public opinion trends have left a once reluctant administration with nothing to lose by offering up meaningful policy.

Headline: Bush critics warming to his plans for cutting emissions

Lede Paragraphs: After an initial chorus of criticism from environmental groups and European politicians, there have been significant expressions of support for President George W. Bush’s shift last week to supporting cuts in emissions of greenhouse gases linked to global warming. On Friday, the United Nations secretary general, Ban Ki Moon – who plans his own push on climate action within the United Nations this autumn – endorsed Bush’s proposal, particularly if it tied into talks aimed at invigorating the Framework Convention on Change, a 1992 climate treaty that has not significantly blunted emissions.

“I think it is a positive statement, in the sense that the United States, at the level of President Bush, has realized the urgency and importance of climate change,” Ban said. “I hope such an effort by the United States will be mutually reinforcing the international community’s efforts, particularly led by the United Nations.”

End paragraph: Jon Krosnick, a professor of political science and psychology at Stanford University, said the timing of Bush’s plan was predictable given the tendency of most politicians to wait on complex issues until public attitudes solidify. Polling now shows many Americans want government action to cut climate risks, he said.

“Right now, with their approval ratings as low as they are, with real questions about the electability of a Republican candidate in 2008, this step was logical,” Krosnick said. “There is little to be lost and lot to be gained. If he sticks with it, the president could take the wind out of the sails of his critics.”

At the NY Times, the headline is far less positive in characterizing reaction, implying that there are at least a few who find something to like with the Bush plan, though expert opinion still weighs in heavily against it. The lede paragraph reinforces this impression, asserting any support is “conditional” upon the administration following through on its plan. The end quote in the article, from Dartmouth professor and environmental advocate Michael Dorsey, emphasizes that on climate change, given its track record, the Bush administration is not to be trusted.

President Bush’s shift last week toward cutting worldwide emissions linked to global warming was greeted with widespread skepticism. But mixed in with the doubts was a substantial dose of support, albeit conditional.

To some scientists, officials and experts immersed for years in troubled treaty talks under the United Nations, the president’s new plan is a potentially useful tool for gaining new consensus. The plan calls for rounding up the world’s biggest emitters of greenhouse gases and, in 18 months, settling on nation-by-nation programs for slowing emissions and on a long-term common goal for reducing them.

End Paragraph: Michael K. Dorsey, an assistant professor of environmental studies at Dartmouth College, said Mr. Bush would have to show concrete progress in the fall to overcome “a legacy of stalling, back-pedaling and undermining of international talks.”

“Give us a press conference to say what you’ve done yesterday,” he said. “Don’t tell us any more what you’re going to do tomorrow.”

UPDATE: Over at CJR Daily, Curtis Brainard has a review of how the major news organizations covered Bush’s climate announcement.

The Exploratorium Joins the Blogosphere

Mary K. Miller of San Francisco’s The Exporatorium has launched a new blog called The Accidental Scientist. The blog is focused on introducing readers to the ways in which scientists […]