Chances are you have probably never heard of the stem cell tourism industry.  This nascent yet growing industry consists of clinics and practitioners in China, Mexico, and Germany who promote stem cell derived treatments that are largely unproven and untested.

You may not have heard of these clinics, but given high levels of motivation and information seeking, many potential patients and their families have paid close attention to news coverage of the clinics and their claims.

There’s just one problem: Rather than providing necessary context , the news media have tended to be relatively uncritical, if not predominantly promotional in their coverage, handling the issue more as a human interest story than as an important science or medical story.

In a study published with colleagues at Nature Biotechnology this month, we find that the news media in the U.S., U.K, Canada, New Zealand, and Australia has focused “primarily on the individual patient, their hopes and specific treatment plans or approach, rather than on the potential risks associated with these unproven treatments, current scientific and clinical limitations, or the various policy issues implicated by this emerging phenomenon.”

The study led by Amy Zarzecny at the University of Alberta Health Law Institute is the latest to follow from a Canadian Stem Cell Network project directed by Professor Timothy Caulfield, senior author on the article.

The article requires a university subscription to access, but below I have pasted excerpts followed by two tables summarizing key findings.

As highlighted in a News Feature “Trading on hope” published in this journal, stem cell tourism is a growing and increasingly contentious phenomenon. By ‘stem cell tourism’, we refer to the emerging practice that sees patients travel abroad to receive (largely) unproven stem cell treatments that are generally not approved or available in their home country.   Although precise numbers are unknown, current information suggests that potentially thousands of patients each year from various countries are travelling around the world to receive stem cell therapies for a wide range of conditions.

The stem cell tourism phenomenon is highly controversial. The therapeutic possibilities promised by the clinics involved engage the hopes of often desperate patients and their families, including those who feel there are no other options. These individuals are understandably anxious to have a reason to feel optimistic about their medical prospects, and often frustrated with their native medical systems. Patients pay for these treatments personally, and research reveals costs ranging from $5,000 to $39,500 (ref. 4), or an average cost of $21,500 (excluding travel and accommodation)3. These treatments generally have not proceeded through the clinical trial process, and published research reveals little to no evidence of efficacy for the services advertised by these clinics3. There also appears to be an overall lack of transparency regarding the specifics of treatment protocols and an absence of comprehensive posttreatment follow-up. Accordingly, many experts are highly skeptical of the claims made by stem cell clinics and, particularly in light of emerging evidence regarding adverse effects from such treatments6, concerned about potential risks….

…Not surprisingly, treatment providers are often highly motivated to defend their work and to advocate for the use of novel treatments.  This range of conflicting and competing perspectives regarding stem cell tourism serves to create a confusing picture of the field in the news media, especially for patients and their families. Previous research points to two key mechanisms by which news media portrayals are likely to influence audiences. First, through a process of agenda setting, the news media calls attention to specific issues, events or developments11, such as the claims of stem cell clinics or developments in the field. Given high levels of motivation, patients and their families are likely to pay closer attention to stem cell-related news coverage and to actively seek information about therapies online especially among patients and their families.

Not only do the news media—and newspapers especially—call the public’s attention to medical claims and (unproven) therapies, but news coverage also selectively frames the nature of these claims. ‘Frames’ is the conceptual term for interpretative storylines that emphasize specific dimensions of a complex topic over others, often reducing complexity and uncertainty, and leading audiences to consider certain considerations over others in reaching judgments and making decisions (Supplementary Discussion 1). Given the likely importance of the news media—and newspapers in particular—in setting the agenda of the public and in shaping public interpretations, we thought it essential to investigate the level of attention to stem cell tourism in the print media and how the emerging industry is characterized. Our analysis also provides information about the individuals accessing these services, where the clinics reside and what services are provided….

From the conclusion to the study:

…On the whole, these data suggest that print media portrayals of stem cell tourism are largely and increasingly positive in nature.  Furthermore, their focus is primarily on the individual patient, their hopes and specific treatment plans or approach, rather than on the potential risks associated with these unproven treatments, current scientific and clinical limitations, or the various policy issues implicated by this emerging phenomenon. In many respects, these results are unsurprising; the circumstances surrounding an individual’s pursuit of stem cell tourism often make for a powerful personal interest story. It is impossible not to empathize with the plights of those desperately seeking treatment for themselves or their loved ones, and important to be wary of overly broad generalizations of a field that appears to encompass an incredibly broad range of potential treatments and treatment providers. Nonetheless, there are serious concerns associated with the rise of stem cell tourism, including physical and financial risks, lack of transparency and appropriate review procedures, exploitation of vulnerable patients (including minors) and various policy issues, which must not be minimized. Although some of these issues are making their way into the print media, it is clear that continued efforts are necessary to improve the balance in media reporting of this topic.

When medical experts and organizations do actively seek to engage journalists and the public on the uncertainty of stem cell tourism and the need for regulation, as was the case in 2008 with the ISSCR’s guidelines, our findings do point to an influence on coverage, with the effort balancing the otherwise overwhelmingly positive portrayal in the press. This balance is an important element in promoting a knowledgeable public, necessary both for facilitating informed debate regarding stem cell tourism and for protecting potentially vulnerable individuals. 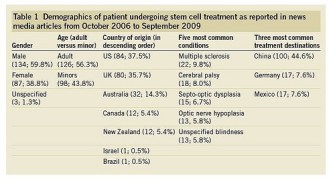 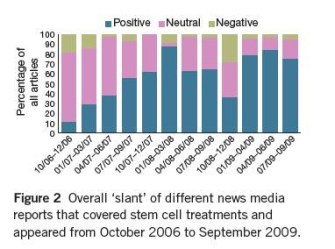 Recently, I had the rare opportunity to be on both The Colbert Report and the Conan show. As you can imagine, we had a madcap, hilarious romp through time travel, […]