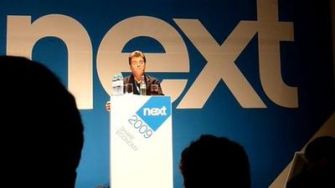 The guiding manifesto of Web 2.0 has always been that the Next Gen Internet will be participatory, inclusive and inherently democratic. What’s not to love? However, is it possible that Web 2.0 will actually lead to a completely unexpected form of Internet “feudalism” in which an entrenched tech-savvy elite — people who you follow, not those who follow you — exert an inordinate amount of power, influence and control over the future growth and development of the Web? In a four-minute video interview with Tech Crunch at Next Web 2009, Web 2.0 visionary Andrew Keen makes exactly this point, noting that Web 2.0 may #fail to deliver on its initial premise. Keen talks about the end of Web 2.0 and the dawn of a new age of individualism, driven primarily by Twitter:

“The controversial, anti-Web 2.0 figure of Andrew Keen spoke at the
Next Web in Amsterdam and outlined some of the themes that he is
developing for his next book… In a long speech – without notes – he talked about a new age of
individualism. With the end of the industrial revolution, “we”
essentially are now “the product”.

He said we are entering a “revolutionary age in which traditional,
industrial media is being swept away by individuals.” That sounds
familiar to his previous pronouncements. But his speech hit a crescendo when he practically shouted across
the conference hall that “Web 2.0 is f***ed! Web 2.0 doesn’t work – it
doesn’t generate revenue.” […]

Keen believes traditional media dies with Web 2.0 and although
technology enables self expression, is “not a viable media economy.” […] In fact he called Twitter the “nail in the coffin of Web 2.0″. He
said it’s “the future of individual media in the age of the individual…
a future when individuals become brands. People with skills are able to
sell their skills on the network. I call this real time social media.”

But this is also “intimidating and scary” to him. It is “Darwin and
Marx at the same time.” He thinks Twitter is “Feudal” in that those
with large numbers of followers behave like barons of old, picking
those they favor at random…”

It’s certainly a provocative thesis, especially when one takes a macro-historical view of events — events not only on the Web, but also in the political sphere. Look at how things turned out in 1917 Russia, for example, when the “party of the proletariat” promising a bright shining future of equality for workers and peasants turned out to offer something far different. A revolution always eats its own (or as Robespierre famously remarked, “La révolution dévore ses enfants”) — and as we all know, the 1917 Russian Revolution devoured not only Zinoviev, Kamenev, Bukharin and Trotsky — it also devoured a whole generation of impassioned ideologues who thought they were building the glorious future. I’ve always felt that the Web 2.0 kool-aid cocktail was infused with a bit of Marxism-Leninism in it, with all its promises of returning power to the people, destroying the media elite, and ushering in a new era of classless, participatory democracy.

UPDATE: Was just reminded that Evgeny Morozov, a guest speaker at the TED Conference, has also spoken out on how the Internet aids dictatorships. He refers to himself as a contrarian of the online revolution. It’s not all tweets and rainbows, kids.

[image: Andrew Keen at Next Web]

The Baby Boomer Generation has had a disproportionate economic and cultural impact on nearly every trend of the past 40 years, so why not the Internet? Of late, there’s been […]