For decades, holograms have been seen largely on the screen, in sci-fi movies and TV shows like “Star Wars” and “Star Trek.”

The famed holodeck on “Star Trek” was used on a variety of the Federation star ships and was mostly seen when someone had to visit the sick bay as part of the “Emergency Medical Holographic program” (EMH). A 3-dimensional transparent image of someone would suddenly appear—but it was also something that you could interact with and ask questions. In “Star Wars” there was a similar type of holographic technology (usually projected from some type of handheld device). One of the more popular instances is when R2D2 projected a 3-dimensional image of Princess Leia pleading for help from Obi-Wan Kenobi. 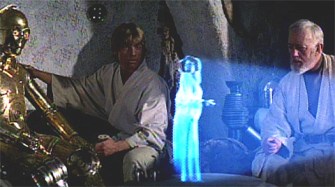 Hollywood makes this type of technology look easy, but in the real world, holographic technology has usually resulted in relatively primitive designs. We have experimented with a variety of different methods—some successful and some not so successful. Back in July, a team at Tokyo University was one of the first groups to successfully create a system of touchable holograms. If you had a hologram of a small red ball, for example, you could essentially interact with it.. The ball would know when it was near your hand and would appear to bounce off of it. When this technology first made news, it was compared to a primitive version of the holographic computer desktop interface in “Minority Report.”

But now another major development in holographic technology is making headlines. A new device has been created that can transmit 3-dimensional images in close to real time. This could result in major advances in holographic tele-presence technologies. For example, I could conduct a keynote speech in Tokyo from the comfort of my own home—a 3D, high-resolution, full size image of my body could be projected on stage in front of a live audience over 6,000 miles away. If you are familiar with the work of my colleague, Ray Kurzweil, you may be aware that he sometimes gives “virtual lectures” where a 3D image of him is projected into a special podium. This tele-presence system, designed by Teleportec, has to have two running systems: one in Ray’s office, and one on the special podium that displays the image. This allows him to conduct lectures in real time and interact with the audience on the other end. He can even making eye contact with students in the audience.  (Image below: Ray Kurzweil using the Teleportec Video Conferencing Technology) 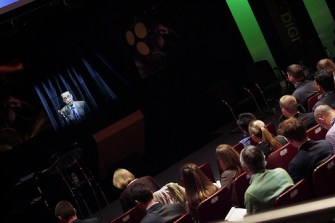 But now a small group of researchers from the University of Arizona have unveiled the fastest 3D motion hologram. What makes this different than say watching “AVATAR” in an IMAX 3D theater is one word: glasses. This group of researchers have successfully demonstrated a display screen which presents an image which is viewable from all sides without 3D glasses. They have done all this with the use of 16 cameras allowing them to create a 45-degree 3-dimensional image. Each camera takes a different snapshot (360 degrees) and the more cameras that are used, the more refined the resolution of the image. In the past, there have always been issues with the refresh rates of the image. The group’s previous version only was able to render a new image about every four minutes. The new system refreshes ever two seconds, thanks to a special type of photorefractive material on the screen which reacts chemically to the lasers used to create the holographic images. All of the images that each of the cameras record is played back to the observer using fast-pulsed laser beams which then create holographic pixels “hogels” which show up on the special photo refractive polymer.

Like every other advance in technology, it will take some time to perfect before it’s brought to market but it seems that we may not have to wait too long. The current system only displays in one color, but the University is stating that perhaps in another decade or so, commercially viable holographic television screens could start hitting the shelves.

The applications for such a system could essentially change our daily lives. The lead researcher of the development, Nassar Peyghambarian states that “It can be a game changer in some industries.” He also states that “the first that come to mind are product demonstrations and giving the ability to actually see a product in 3-D before the money is spent to build it. It also could, for instance, immerse prospective tenants in their new office suite or show hotel mavens the interior decorator’s vision for their remodeled rooms.” Some other applications could include telemedicine, 3D mapping technologies, entertainment, remote guidance during emergency situations, remote video conferencing, manufacturing, and a myriad of others.

— My webmaster, Michael Phillips, recently conducted an interview with Assistant Research Professor & first author on the paper submitted to Nature, Pierre-Alexandre Blanche, about the recent developments.

PAB: As a physicist, I was attracted by optics as a new frontier. We mostly apprehend the world thanks to our sight and when we probe the universe it isalso mostly thanks to optics (i.e. telescopes). Optics is the infinitely large, and the infinitely small with microscope, but also ultra fast with photonics that multiply the speed of electronics by several factors. Optics is beautiful like rainbows, and dramatics as the Hubble space telescope images. Finely, holography is manipulating the light and tailoring it as a sculptor will do with marble.

PAB: We have already demonstrated the feasibility of multicolor holograms in the same article. We did not implement multicolor into the telepresence system yet since this setup is constantly remodeled to experiment new ideas and applications. If there is interest, it sure can be done.

PAB: In the next 5 years, this is our goal to demonstrate different feasibilities for that technology. The most important one is video-rate, we want to be able to record our holograms at a rate comparable to television so the viewer de not experience any lag or flickering; and we have already traced the roadmap to achieve it. We also have different setup in mind like a tabletop display where the viewer can look around and see the object according 360°. We are working on that one right now.

PAB: We see the development of this technology in two steps. First we want to develop systems that correspond to very specialized application like medical imaging and military imaging. All the corner stones for such systems have been laid out and there is no to much breakthrough that need to be discovered for this to happen. It is more about refinement. Next we can think about more general audience when image speed achieve video rate and the size of the system can be shrunk thanks to new laser technology and better polymer performance. Telepresence for large conference rooms is one of those applications. Ultimately, yes we envision a holographic television in lets say 15 years.

PAB: A lot of work! What we reported in our publication are land marks but certainly not an end per se. We are not resting in our laurels, and since we submitted our manuscript to Nature, we already made some progresses in several areas.

He couldn’t identify the numbers 2 through 9. But strangely, he could still see ones and zeros.
Health

For a time, Francis Fukuyama looked like a prophet.
Up Next
Guest Thinkers

A couple of updates on two of the volcanoes that have caught people’s attention right now! Oh yes, and sorry about the brevity of many of these updates lately – […]