Private industry and militaries around the world depend on the continued advancement of computer power and cheaper electronics for the development of robotic systems. Every time you turn on the television or read the newspaper, it always seems as if we are reading about a new advancement in robotics, the development of a new robot or even progress into Artificial Intelligence. In fact, one of my last shows on Sci Fi Science “A.I. Uprising” touched on the possibility of a world ruled by artificial intelligence and how we are approaching the time when computers will exceed the power of the human brain.

However, we should be careful to point out that the remarkable advances mentioned here involve robotic systems which require human guidance. They are not fully autonomous systems which can think for themselves and make decisions independently, except in a primitive way. Many of these robotic systems are remote-controlled by a human, or require continuous human supervision.

Robots that can act like humans are still a very distant dream. 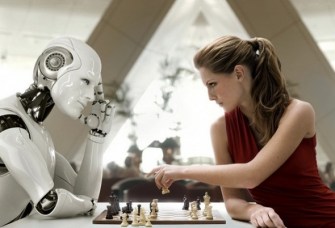 But not all robotic systems necessarily have to “think” in the way that they are portrayed in Hollywood movies like “Terminator” or “Short Circuit.” Some robots are used in surgical procedures, fast-paced manufacturing systems, autonomous satellites, and remote-controlled systems. There are even even assistant robots that can help elderly people move about, remind them to take their medication and do household chores.

The continued advancement of computer power will allow for faster, more intelligent and stronger robotic systems. In addition to Moore’s law eventually coming to a halt, prices will continue to drop and hardware will continue to leap forward. Billions of dollars have been spent into the world of robotics and there is no doubt that billions more will be spent over the next couple of decades.

In addition, major strides have been made in the area of robotic vision; being able to recognize faces and remember them. The tumbling cost of camera, optics and sensing chips coupled with increased processing power is going to make for some interesting developments. As these advancements continue to take place, larger growth spurts will span into the domestic markets including smart-toys and remote controlled devices. Robotic systems essentially already play a major role in our lives including ATM’s, copy machines that collate, fold, staple and organize all of your documents with the push of a button and even the all popular robotic vacuum cleaner named Roomba. These types of devices have of course have been around for years but now imagine the impact that the increasing computing power, machine intelligence, vision and control systems will do to this market in, say, the next 20 years.

An Introduction to Breakthroughs: Alzheimer’s Disease

Our society is faced with a disturbing reality: One in eight people aged 65 and older has Alzheimer’s—a disease that currently has no cure.  Annual costs associated with the disease […]