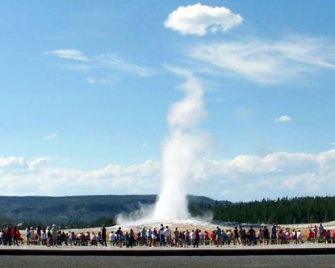 A few thoughts about faulting, earthquakes and eruptions:

The earthquakes at Yellowstone have been universally attributed to fault movement rather than magmatic activity by the USGS and the researchers at the University of Utah. This is likely based on the moment solutions for the earthquakes (i.e., the sense of motion on the earthquake – side to side, dilation, etc.) and the fact that there are no directly correlative volcanic/magmatic symptoms to go with them (such as pronounced, short-term bulging, excessive hydrothermal venting, etc.) Now, a lot of you are concerned that maybe we’re all misreading this and the earthquakes are being seen as merely tectonic because magma is moving things around down there.

Well, it is a little bit of a chicken-and-egg scenario: do fault move because of magmatic activity or is magma movement facilitated by fault movement. There is likely a little of both can could happen – an earthquake can trigger an eruption if the system is posed at the brink of an eruption and conversely, as we know, magmatic movement can trigger earthquakes because the crust has to accommodate the new material (it has to “make room”). So, how can we be sure that this isn’t happening at Yellowstone – and remember, for extreme conclusions (like an impending eruption) we need exceptional evidence. (And take note, I’m not seismologist or structural geologist, so feel free to point out where I might be off in these descriptions).

(1) The moment tensor/focal mechanism solutions for these earthquakes are dominantly strike-slip – i.e., the “beach ball” symbol suggests the movement is side-to-side motion with some extension on the fault – or a transtensional movement with both some extension and shear. This sort of movement can be accomplished without magma just from movement along faults due to extension. However, before you get too excited …

(2) The earthquakes are in the middle of an area of historical seismic activity that don’t produce volcano eruptions. The previous activity is the best sign for what is to come is what typically happens. So, the fact that most earthquakes in this area, at that depth with this solution are tectonic rather than magmatic, it would indicate that the current swarm is saying the same thing. It is sort of like watching a guy who only hits singles but hit a home run years ago come up to bat and expect him to hit a home run merely because he’s at bat. The earthquakes are commonplace at Yellowstone – just a normal at bat for the caldera.

(3) If this were, by some chance, to be magmatically related, we would expect to see a progressive shallowing of the earthquakes as the magma moved upwards (if we’re worried about an eruption). So far, I have not seen either in the current swam. Even the most recent earthquakes are still at ~9-11 km / 5.6-6.8 mile depth. If you’re worried about an eruption, you’d need the earthquakes to start progressing upwards – without it, it could be lateral movement of magma, or just microfaults adjusting at depth.

(4) Finally, although we have accessory anecdotal evidence of changes in the hydrothermal/magmatic system (e.g., Old Faithful isn’t so faithful, the long-lived bulging under Yellowstone Lake, etc.), these correlations do not automatically lead to causation. The caldera system is very complex, so much so that events on one side of the caldera can likely be wholly unrelated to one on the other. Just because we might see signs of change in the active systems roughly correlated with an earthquake swarm doesn’t mean that they must be related. However, it is a good idea to continue look for changes that could end up pointing towards a magmatic causation … with enough evidence.

So, that is my take on this swarm and why we don’t need to be panicked or concerned that things are being misread. There are very clear signs that scientists look for when dealing with earthquakes and their sources, especially when magma is involved.

Monday Musings: Yellowstone Update and Turrialba from space UPDATED with a Turrialba webcam!