Why You Should Never Hit Your Dog

Positive punishment is the classic Skinnerian notion in which a stimulus is applied with the aim of reducing an unwanted behavior. 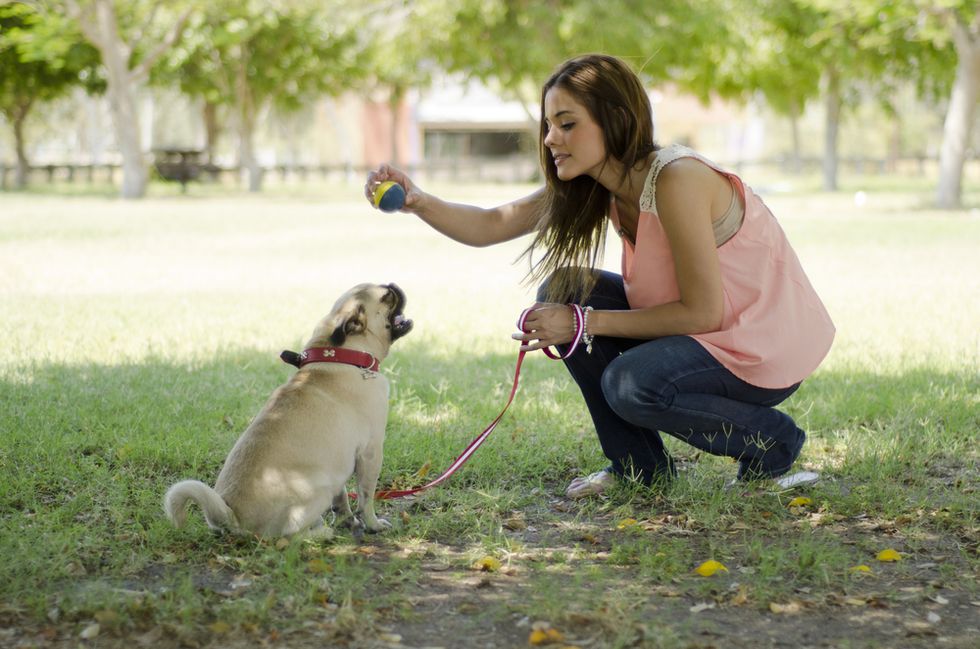 Even if you're not a dog owner, I'd wager you've heard that aplenty. The firm admonishment is occasionally accompanied by the choking yank of a leash or the stinging whack of a newspaper, and often followed by the guilty canine whimpering down or scurrying away, its tail between its legs. Fido has learned his lesson, its owner might think.

But it probably hasn't.

A select breed of dog trainers, including Cesar Millan, the "Dog Whisperer" on National Geographic Channel, actively recommends the use of what's called positive punishment. This is the classic Skinnerian notion in which a stimulus is applied with the aim of reducing an unwanted behavior.

For example, say you don't want your dog to jump up on visitors. The next time he jumps up on somebody, you could give him a strong slap on the muzzle in the hopes that he will associate the pain with the behavior. Thus, he will be less inclined to jump up on people. Millan euphemistically terms such punishment as "discipline."

"Make sure you offer your dog the complete package when you bring him into your world,"encourages a blog post on his website. "Along with exercise, food, shelter, and affection, offer him a healthy dose of rules, boundaries, and discipline. Don't think of discipline as punishment, but just one more gift you give your best friend to keep him happy and balanced," the post proclaims in a sweet, yet eerily dystopian fashion.

But there are a lot of problems with positive punishment. Chiefly, it's not very specific. Dog trainer Pat Miller describes this pitfall in her book The Power of Positive Dog Training. Here's the summary: Say your puppy pees on the living room carpet. Angered, you yell and bark at the piddling pup, causing him to dash away. Congratulations, Miller says, you've successfully scared your dog. But all you've communicated is that he shouldn't pee in front of you or on the living room carpet. Next time, he might simply urinate on a different carpet. The lesson that you wanted to impart -- "don't pee in the house" -- has not been related. Moreover, pioneering research in 1968 conducted by Richard Solomon at the University of Pennsylvania showed that unless you catch and punish the dog in the act, it's unlikely that he will take away any message at all. He will, however, learn to be afraid... of you.

There's no question that if carried out swiftly positive punishment can effectively reduce undesirable behaviors, but it will also give rise to two unwanted side effects: fear and aggression. In 2009, researchers at the School of Veterinary Medicine at the University of Pennsylvaniadistributed a survey (PDF) to owners who previously brought in their canines to address aggression problems. On the anonymous questionnaire, owners were asked to outline the training methods they had used with their dogs in the past and also to describe their dog's response. Animal behaviorist and University of Wisconsin professor Patricia McConnelldescribes the results on her blog:

The most confrontational, and I would argue, aggressive, behaviors on the part of the owners resulted in the highest levels of aggressive responses from the dogs. 43% of dogs responded with aggression to being hit or kicked, 38% to having an owner grab their mouth and take out an object forcefully, 36% to having a muzzle put on (or attempted?), 29% to a "dominance down," 26% to a jowl or scruff shake.

"Violence begets violence, aggression begets aggression," McConnell added. Her conclusion is corroborated by additional studies. In 2008, Belgian scientists analyzed the performance of thirty-three dog-handling teams in the Belgian military. They found that the dogs classified as "low-performance" were punished more often than "high-performance" dogs. These sanctions included abrasive leash pulls and hanging the dogs by their collars. The following year,researchers from the U.K. detailed the findings of a study that examined dogs kept in shelters, discovering that attempts by humans to assert dominance over canines resulted in increased aggression.

"We should be teaching our dogs, rather than forcing and threatening them," McConnell urges.

This means trading in rolled-up newspapers for dog treats, roaring yells for happy praise, and hard smacks for soft pats. Positive punishment becomes positive reinforcement, where good behavior is rewarded rather than bad behavior being punished. Writing at LiveScience, Lynne Peeples describes a key study that compared the two methods, with positive reinforcement clearly coming out on top:

In February 2004, a paper in Animal Welfare by Elly Hiby and colleagues at the University of Bristol compared the relative effectiveness of positive and punitive methods for the first time. The dogs became more obedient the more they were trained using rewards. When they were punished, on the other hand, the only significant change was a corresponding rise in the number of bad behaviors.

Cesar Millan's "discipline" approach may produce seemingly miraculous results on television. But in the real world, it's neither effective nor substantiated.