The twisting path to becoming less dumb has led to many stops. 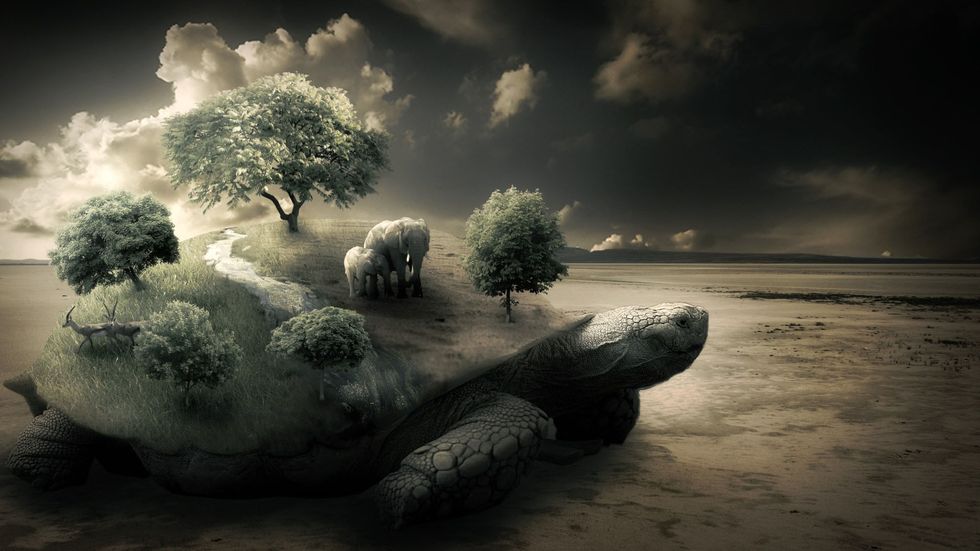 Back when Shakespeare said you were the paragon of animals, both noble in reason and infinite in faculties, he did so during a time when physicians believed the body was filled with black bile, yellow bile, phlegm, and blood, and all sickness and health depended on the interaction of those fluids. Lethargic and lazy? Well, that’s because you are full of phlegm. Feeling sick? Maybe you’ve got too much blood and should go see a barber to get drained. Yes, the creator of some of the greatest works of the English language believed you could cure a fever with a knife.

It’s easy to laugh at the very wrong things that people once believed, but try not to feel too superior. My friend Susannah Gregg was living in South Korea and working there as an English teacher when she first learned about fan death, a common belief among people in that country that oscillating desk fans are among the most deadly inventions known to man. She was stepping out for a beer with a friend when he noticed, to his horror, she had left her fan running with her pet rabbit still inside her house. Her friend, a twenty-eight-year-old college graduate, refused to leave until she turned off the fan. He explained to her that everyone knows you can’t leave a fan running inside a room with the windows shut. That would mean certain death. It was shocking to him that she was unaware of something so simple and potentially life-threatening. Susannah thought he was kidding. It took several conversations to convince him it wasn’t true and that in her country, in most countries, no one believed such a thing. She successfully avoided absorbing the common belief not because she was smarter than her friend but because she had already done the experiments necessary to disprove the myth. She had slept in a house with a fan running many times and lived to tell about it. Since then, she has asked many friends and coworkers there about fans, and the response has been mixed. Some people think it is silly, and some think fan death is real. In 2013, despite the debunking power of a few Google searches, the belief that you shouldn’t fall asleep or spend too much time in a room with a running electric fan is so pervasive in South Korea that Susannah told me you can’t buy one within their borders without a safety device that turns it off after a set amount of time. The common belief is so deep and strong that fan manufacturers must include a safety switch to soothe the irrational fears of most consumers.

Your ancestors may not have had the toolset you do when it came to avoiding mental stumbling blocks or your immense cultural inheritance, but their minds worked in much the same way. The people who thought the world rested on the back of a great tortoise or who thought dancing would make it rain - they had the same brain as you; that is to say, they had the same blueprint in their DNA for making brains. So a baby born into their world was about the same as one born into yours. Evolution is so slow that not enough has changed in the way brains are made to tell much of a difference between you and a person from ten thousand years ago. That means that from gods in burning chariots to elves making cookies in trees, people long ago believed in all sorts of silly things thanks to the same faulty reasoning you deal with today. They, too, were fueled by a desire to make sense of reality and to answer the age-old question: “What, exactly, is happening here?” Instead of letting that question hang in the air, your distant relatives tended to go ahead and answer it, and they kept answering it over and over again, with newer yet equally dumb ideas because of one of the most profoundly difficult obstacles humans have faced since we started chipping away at flint to make heads for spears. This malfunction of the mind is called the common belief fallacy.

In Latin, it is argumentum ad populum, or “appeal to the people,” which should clue you in that this is something your species has worried about for a long time. The fallacy works like this: If most people believe something is true, you are more likely to believe it is true the first time you hear about it. You then pass along that mistaken belief, and on and on it goes.

Being a social creature, the first thing you do in a new job, new school, new country, or any other novel situation is ask people who are familiar with the environment to help you get acquainted with the best way to do things, the best places to eat, the hand gestures that might get you beheaded, etc. The problem, of course, is that your info is now based on opinions that are based on things such as conformity and emotions and norms and popularity, and if you’ve spent any time in a high school, on a dance floor, or at a rave, you know that what is popular is not always what is good or true. It isn’t exactly something we’ve overcome, but at least we now have a strategy for dealing with it.

Before we had a method for examining reality, the truth was a slippery fish, which is why your ancestors were so dumb. So dumb, in fact, that for a very long time people got smarter in a slow, meandering, and unreliable sort of way until human beings finally invented and adopted a tool with which to dig their way out of the giant hole of stupid into which they kept falling. The hole here is a metaphor for self-delusion. Your great-great-great-grandparents didn’t really keep falling into giant holes, at least not in numbers large enough to justify a book on the topic.

The tool here is also a metaphor. I’m talking about the scientific method. Your ancestors invented the scientific method because the common belief fallacy renders your default strategies for making sense of the world generally awful and prone to error. Why do bees like flowers? What causes snow? Where do babies come from? Every explanation in every tribe, city, and nation was as good as the next, even if it was completely made up. Even worse, once an explanation was woven into a culture, it would often become the official explanation for many lifetimes. “What is thunder?” a child might have asked. “Oh, that’s the giant snow crab in the sky falling off his bed,” a shaman would have explained, and that would have been good enough for everyone until they all had their own kids and eventually died of dysentery. That hamster wheel of limited knowledge kept spinning until the scientific method caught on. Even then, there was a long way to go and lots of cobwebs to be cleared from common sense.

Scholars used to believe that life just sort of happened sometimes. Learned people going all the way back to Aristotle truly believed that if you left meat outside long enough it would spontaneously generate new life in the form of maggots and flies. The same people thought that if you piled up dirty rags and left them alone for a while they would magically turn into mice. Seriously. The idea started to fade in 1668 when a physician named Francesco Redi tested the hypothesis by placing meat and eggs in both sealed and unsealed containers and then checked back to see which ones contained life. The sealed containers didn’t spontaneously generate flies, and thus the concept began to die. Other thinkers contested his discoveries at first, and it took Louis Pasteur’s great fame and his own experiments to put the idea away forever some two centuries later.

People learned that science, as a tool, as a lens to create an upside-down way of looking at the world, made life better. Your natural tendency is to start from a conclusion and work backward to confirm your assumptions, but the scientific method drives down the wrong side of the road and tries to disconfirm your assumptions. A couple of centuries back people began to catch on to the fact that looking for disconfirming evidence was a better way to conduct research than proceeding from common belief. They saw that eliminating suspicions caused the outline of the truth to emerge. Once your forefathers and foremothers realized that this approach generated results, in a few generations your species went from burning witches and drinking mercury to mapping the human genome and playing golf on the moon.

The twisting path to becoming less dumb has led to many stops.

and starts, yet humans persist. Sure, scientists are just people, prone to the same delusions as anyone else, but the enterprise, the process, slowly but surely grinds away human weakness. It is a self-correcting system that is always closer to the truth today than it was yesterday.

The people who came before you invented science because your natural way of understanding and explaining what you experience is terrible. When you believe in something, you rarely seek out evidence to the contrary to see how it matches up with your assumptions. That’s the source of urban legends, folklore, superstitions, and all the rest. Skepticism is not your strong suit. In the background, while you crochet and golf and browse cat videos, people using science are fighting against your stupidity. No other human enterprise is fighting as hard, or at least not fighting and winning.

When you have zero evidence, every assumption is basically equal. You prefer to see causes rather than effects, signals in the noise, patterns in the randomness. You prefer easy-to-understand stories, and thus turn everything in life into a narrative so that complicated problems become easy. Scientists work to remove the narrative, to boil it away, leaving behind only the raw facts. Those data sit there naked and exposed so they can be reflected upon and rearranged by each new visitor.

Scientists will speculate, and they will argue, but the data they extract from observation will not budge. They may not even make sense for a hundred years or more, but thanks to the scientific method, the stories, full of biases and fallacies, will crash against the facts and recede into history.

This excerpt is an edited (to be made much shorter) and slightly altered chapter excerpted from the book, “You Are Now Less Dumb.”