If You're Happy and You Know It, Check this Box.

Lower your expectations now. You'll find yourself much more satisfied by the end. 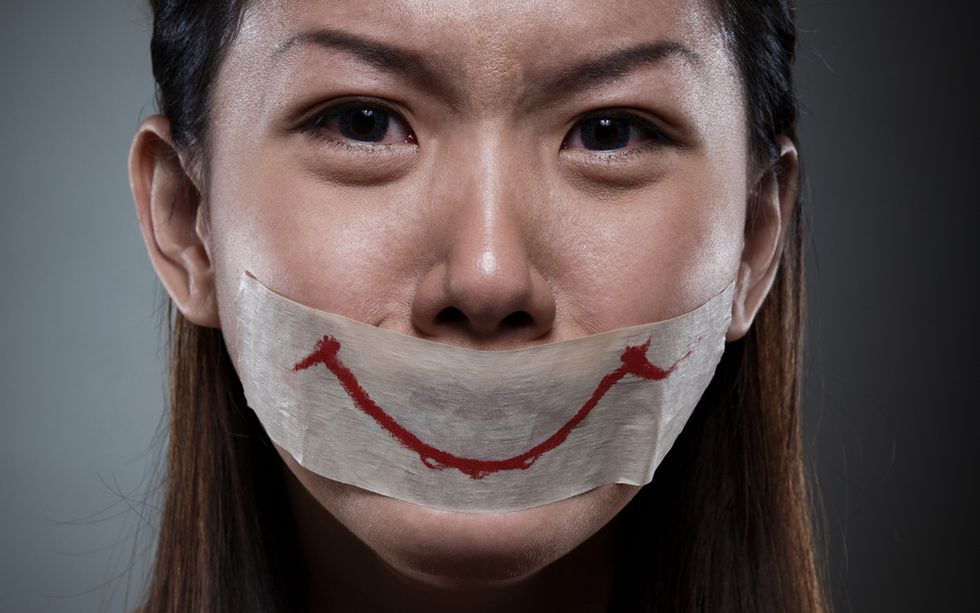 Have you heard that money buys happiness? That's right, your parents lied to you again. In a recent global survey, researchers demonstrated that wealth is a key variable that can explain the disparity of happiness between countries. And we know that it's really true, because happiness research is now SCIENCE.

But it wasn't always this way. Happiness research first emerged as an officially sponsored discipline in 1972, when the then 16-year-old King of Bhutan Jigme Singye Wangchuck introduced Gross National Happiness to his country as an alternative measure of societal well-being to Gross Domestic Product. This development was met with a resounding global silence. No one cared, and the metric was widely derided or, at best, ignored. Bhutan used the research as the rationale to cut down on deforesting and mandate that tourists spend at least $200 USD during their visits. In short, it used to be cool. However, since then, and especially after the research methodology grew more standardized in the nineties, happiness research has taken hold in manifold lamer ways. Economists now eagerly quantify all the fun they're missing out on while more and more governments are surveying their citizens' 'well-being' or 'life satisfaction'. Even the mother country, Britain herself, has tasked its Office of National Statistics to a 4-year $3.2 million research project on the subject, dubbed by the Wall Street Journal as a “national wellbeing campaign.”

Now that happiness research has been embraced by both economists and her majesty the Queen, few readers will need further proof that this discipline is seriously suspect. But in case you're still credulous, here's why you're wrong.

“Taken together, how would you says that things are these days?”

“Do you think of yourself as very happy, pretty happy or not too happy?”

“Have you been feeling reasonably happy all things considered?”

The above are questions taken from various happiness surveys. Based on answers to questions such as these, researchers have determined the following: giving away money makes people happier than spending it on themselves; eating chocolate sparingly makes us appreciate chocolate more; and while people expect that 'life satisfaction' will double if they make $55,000 per annum versus $25,000––in fact, they are only 9 percent more satisfied when such a change in fortune occurs. But how do we know this? And what does “9 percent more satisfied” actually mean?

Money Matters: According to Gallup global polls, across countries, there is a direct causal relationship between wealth and self-reported well-being.

Exercise Doesn't: Based on studies of twins and families, Dutch researchers have shown that there is no causal effect between happiness and physical activity. But, they are Dutch.

Forced Affirmation Hurts: Those with low self-esteem feel even less confident after attempts to affirm themselves and (apparently) failing. This accompanies a recent trend in therapy, which advises patients to accept “negative self-talk,” on the grounds that faking it till you make it doesn't work when the person you're trying to fool (yourself) knows it's fake.

Living in the Moment Helps: Daydreaming is associated with dissatisfaction – unhappy activities are associated with wandering minds, and often, such minds wander into an unhappy place.

The Pursuit of Happiness Makes You Sad. The single-minded search for happiness makes us unhappy. One study reports that “[those] primed to value happiness became less (not more) appreciative of positive events in their immediate environment.”

It is easy to find problems with surveys predicated on questions ending with “all things considered”, but the most salient are issues of subjectivity and context.

Imagine how Ee-or from Winnie the Pooh might answer the questions above. Would you expect his answers to bear any correlation to his external environment, or would they almost entirely be determined by the fact the Ee-or is kind of a downer?

Now imagine that the Queen from Snow White was asked the same question, after she thinks that Snow White has been vanquished. She would probably report that she's SO HAPPY. HA. HAHA. Do you believe her? And if so, do you think that her version of happiness should be recognized as commensurate with Piglet's?

Subjectivity is the fundamental problem with basing scientific studies on personal responses to questions like, “Taken together, how would you say things are these days?” Maybe people who exercise are just more moderate when they assess their own happiness. Maybe when people make $55,000 a year up from $25,000 a year they are in fact twice as happy as they would have previously defined it, but they're also 95.5% more jaded, so they only report a 9% increase. (And again, does anyone know what a 9% increase in happiness feels like?) Subjective variables such as these undermine the validity of the data as an assessment of aggregate wellbeing, and severely undermine the validity of using the data to compare happiness across nations. What if everyone in Switzerland is really mean, like the Queen, but society allows them to be mean, so they're all just fantastically pleased with themselves? Or if everyone in Ireland is like Ee-or when they're sober, which is the only time when they're surveyed, but find fulfillment as soon as they're drunk? Or if researchers stumble across a Winnie-the-Pooh-with-perpetual-honey society that finds happiness so unexceptional they don't even bother to report their satisfaction on surveys?

Imagine how happy most G.I.'s were to return home from World War II and find that they could attend college. Imagine how happy 19th century folk were to have plumbing. Now compare that to the contentment of a typical college student today.

Researchers tend to overlook the fact that happiness and satisfaction are based on standards that we often receive from culture and society, which evolve over time. In fact, they can often change upon a simple switch from one sub-culture to the next. Just watch an episode of “Gossip Girl” after viewing “Annie the Orphan” to see what I mean.

This problem is compounded by the tendency for many happiness surveys, such as the Gallup World Poll, to employ a ladder analogy. They ask their respondents to imagine a ladder in which every subsequent rung represents a successively better life, and decide which “rung” corresponds to their current life. Maybe money determines happiness across countries, or maybe American culture is so pervasive that people across the world judge themselves by comparison to the Hollywood dream.

While problems with context challenges the validity of the research, it especially makes comparing happiness over time, like when the Gallup World Poll declared that Americans in 2012 were the happiest since 2008, inherently flawed. Maybe our standards have just dropped. Who's to say?

BUT JUST WHAT ARE WE ASKING, ANYWAY?

Aside from the above superficial problems, there is one profound assumption underlying the vast majority of current happiness literature that is even greater cause for concern: the preference of hedonic happiness over eudaimonic happiness. Eudaimonic happiness comes from Aristotle's notion that “true happiness is found by leading a virtuous life and doing what is worth doing, with the realisation of our human potential as the ultimate goal.” In so many words, a meaningful life. Hedonic happiness as a goal of society is a more recent construction, often attributed to Jeremy Bentham and the utilitarians. This is the “fun” associated with such things as roller coaster rides and, well, sex.

Richard Layard, the pre-eminent happiness economist today, writes, “By happiness I mean feeling good – enjoying life and wanting the feeling to be maintained. By unhappiness I mean feeling bad and wishing things to be different.” Ed Diener, another prominent researcher, proclaims that a happy person is one who “experiences life satisfaction and frequent joy, and only infrequently experiences unpleasant emotions such as sadness or anger.” It is clear that the happiness these researchers seek to quantify is of the hedonic variety. It shouldn't be surprising then that “relaxing, shopping, watching TV, socializing and having sex” are associated with higher levels of happiness, while “household work [and] professional work” are associated with lower levels of happiness.

This might be small potatoes if governments weren't poised to use these metrics as a guide to governance, but given that this seems to be a real possibility, the emphasis of hedonic happiness over eudaimonic happiness is a real concern. If governments incorporate hedonic happiness measurements as a means to estimate the efficacy of their policies, the policies lauded as most “effective” will almost invariably earn this title by giving more weight to the transient, more quantifiable forms of pleasure instead of encouraging citizens to take the path less traveled. An MDMA subsidy is only a few steps away.

Richard Feynman is often attributed the quote, “Philosophy of science is as useful to scientists as ornithology is to birds.” It's not clear who first replied, that ornithology would be of great use to many birds.

This article is not attempting to disqualify a new, exciting fusion between economics and psychology. Happiness research is bursting with promise, and even its most inchoate insights are beyond interesting. But as happiness metrics gain traction as a way to measure societal progress and direct government policy, it's important to understand its limits and especially its dependence on implicit assumptions. As long as we're going to build a new scientific vehicle to steer society forward, let's also be sure to take a look at the road.