Cats Are Just as Loving as Dogs. Maybe More So

The upright tail is probably the clearest way cats show their affection for us. 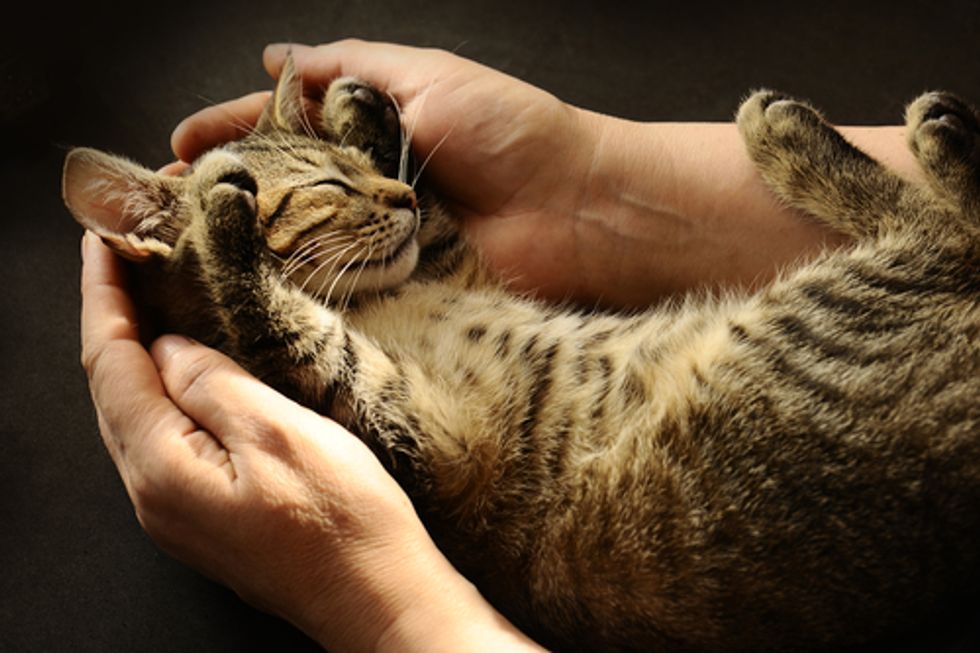 ON THE MORNING of May 21, 2010, Cherry Woods was taking a walk around her suburban Houston neighborhood, when she witnessed an ominous sight. Two, large dogs were barreling towards her from down the block. Woods began sprinting towards her home, but the canines quickly overtook her, knocking her down and ferociously ripping at her legs.

Hearing the commotion from inside the house, Woods' husband Harold tore outside and fought to free his wife from the frenzied animals. Unsuccessful at first, he didn't give up. Cherry's life possibly hung in the balance. It was at that moment, when all was looking grim, that an unlikely rescuer joined the fray.

Lima, the couple's cat, leapt out of the nearby bushes and scratched one of the dogs. The attacking pair promptly released Cherry and turned their attention to the crouched, hissing feline. Thanks to the momentary distraction, Harold was able to drag his bleeding wife to safety.

"I’m very glad that we had [Lima] and that she was here, because when it came down to my wife getting hurt, she jumped right in. It’s amazing," Harold Woods told KHOU.

THERE IS a common stereotype that cats are far less affectionate than dogs. Dogs actually want you around; cats just want you to scoop the food. But while many stereotypes are true, this one is a misconception. Cats are just as fond of their owners; their feelings are just a tad more nuanced, and their adoration less demonstrative.

To begin to understand why, we can look back in time to before dogs and cats were domesticated. Thousands of years surviving in distinct ecological niches have molded the two species' behavior into starkly contrasting models. Dogs, by their nature, are pack animals, living in a ranked community and subservient to a leader. Together, they hunt and kill larger prey. Cats, on the other hand, are mostly solitary, but occasionally form communities of related individuals. As capable hunters in their own right, they have no pressing need to group together.

Thousands of years of living with humans have shaped dogs and cats in similar ways, but the vestiges of ancient evolutionary instincts still linger. At home, your pooch is effectively subservient to you; you are the pack leader. Contrastingly, your cat views you as an individual sharing their space. Your dog is faithful to you by nature, but your cat's affection must be earned.

When it is, cats are just as loving as dogs; you just have to know what to look for. In his new book, Cat Sense, anthrozoologist John Bradshaw clues us in.

"The upright tail is probably the clearest way cats show their affection for us." Bradshaw says.

Rubbing their owners' legs or nearby objects also indicates fondness, as do petting invitations. When a cat jumps on your lap, rolls on their back, or subtly maneuvers to make a body part more accessible, they want to be touched.

"By accepting stroking, cats are engaging in a social ritual that is reinforcing the bond with their owner."

According to Bradshaw, purring also shows contentment, however, it is not necessarily a dead giveaway.

"A purring cat also may just be hungry, or mildly anxious. Some continue to purr even when their body language indicates they are angry."

IN MANY WAYS, the human-cat relationship is much like that of lovers in the early stages of dating: the affection is there, it's just difficult to read. Cats seem aloof and unexpressive because they aren't totally accustomed to sociality. A study conducted earlier this year found that cats -- when hearing the voice of their owner -- orient their heads and ears towards the sound. Moreover, their pupils dilate, which the researchers say is a sign of excitement. A different study, in which animal behaviorists recorded hours and hours of interactions between owners and their cats, found that cats seem to remember kindness and lovingly return it at later instances. Additionally, they noted that food is just as much a token of affection as it is a source of nourishment.

Both dogs and cats must be habituated to humans at a young age. Puppies should be handled between 7 and 14 weeks. For kittens, this sensitive period is narrower -- 4 to 8 weeks -- and more crucial. Felines who don't meet humans until ten weeks or later may fear them for the rest of their lives.

If properly cared for and respected, cats are just as doting as dogs. They won't joyously slobber all over you, but they will like you, in their own, peculiar way.