DNA Street Art or the Future of Genetic Surveillance? 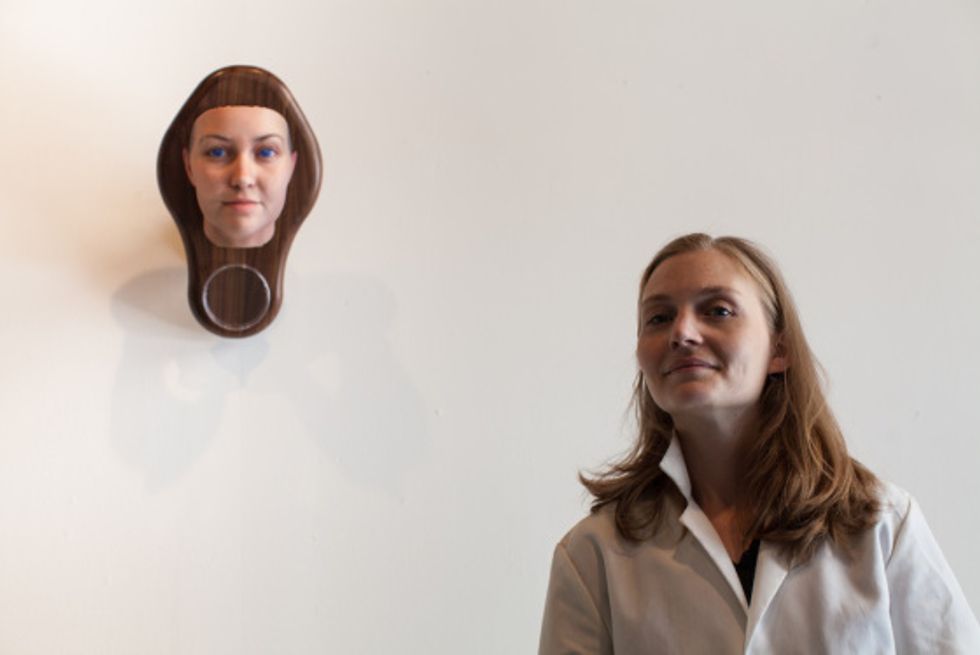 If you thought that random samples of your DNA collected in public spaces could never be used as part of a futuristic genetic surveillance program, think again. In what has to be one of the most mind-blowing art exhibits of the year, Heather Dewey-Hagborg’s “Stranger Visions" project uses DNA sequencing, facial recognition algorithms and 3D modeling software to create life-size, 3D portraits of total strangers, based only on random samples of DNA they’ve left behind in public spaces. A strand of hair, a piece of partially chewed gum, a cigarette butt – any of them could be used to extract your DNA and reconstruct your identity. Dewey-Hagborg's “Stranger Visions” exhibit, intended to call attention to the potential for a new culture of genetic surveillance, is one-part street art, one-part CSI: Crime Scene Investigation.

This DNA-derived art is as creepy as it is cool – imagine walking into your local coffee shop and seeing your face up on the wall without ever having posed for a photo or portrait. A sample of DNA is all that’s needed to determine your gender, your ancestry, eye color, hair color, skin type, and even the distance between your eyes or the width of your nose. The only thing that it can’t tell you, apparently, is the specific age of the person. (As a result, Dewey-Hagborg arbitrarily assigned an age to all of the DNA-derived portraits in her “Stranger Visions” exhibit.) It’s a reminder that, everywhere we go, we unwittingly leave behind traces of our DNA – and it’s exactly these found objects that can be used to determine where you’ve been, who you’ve been with, and what you look like.

Imagine checking out of a hotel room, and a private investigator employed by a jealous spouse being able to sweep your bed to find DNA samples of the person (or persons) you’ve slept with. Imagine falling asleep during a transatlantic business flight, and waking up to see your business competitor sitting in the aisle next to you knowing exactly who you are. Imagine visiting a doctor’s office and being able to know who was in the doctor’s room immediately before you. Anonymity goes out the window if our DNA falls into the wrong hands.

What’s making all this possible is the rapid explosion of the DIY Bio movement – the ability for average, everyday people to work with DNA and genome sequencing in ways that once seemed like science fiction. It's even possible to "open source" your human genome and make it available for total strangers to tinker with. Now that DIY Bio has burst onto the scene (or, at least, appeared at TED Global), it is theoretically possible for anyone to become an expert in using DNA in strange new ways. Brooklyn’s Genspace, where Dewey-Hagborg completed her DNA analysis for "Stranger Visions", now offers weekend classes to anyone who’s interested in DIY DNA sequencing. Every place you go suddenly becomes the equivalent of a CSI crime scene, where anyone is free to sweep up you DNA and use it in ways that are unwitting to you. It's a completely unregulated, Wild West environment right now.

Of course, that doesn’t mean that the Genetic Surveillance Police State is in the immediate near-term future. First of all, it takes an incredible amount of scientific knowledge to take a DNA sample and analyze it properly for specific traits such as hair color or eye color. There’s also a lot of probabalistic guesswork that goes into it as well – Dewey-Hagborg herself mentions all of the informed guesses that go into facial recognition software and the type of artistic creativity that takes all those probabilities and transforms them into works of art. DNA hacking, in other words, is harder than it sounds in the movies or on TV.

However, "Stranger Visions" should be a cautionary tale of what’s possible, especially now that it will soon be possible to map your genes for less than the cost of a big-screen HD TV. In short, the dystopian future of genetic surveillance is possible once we start using DNA as the source code for our identity. People already are able to track us online with our digital footprints. Is it possible that one day they will be able to track us offline with our genetic footprints as well? Thankfully, innovators are already working on solutions. "DNA spoofing", for example, is a form of futuristic counter-surveillance imagined by Dewey-Hagborg in which we would be able to scramble our genetic material, giving us back our anonymity.