Econ 101: The Sex and Love Edition 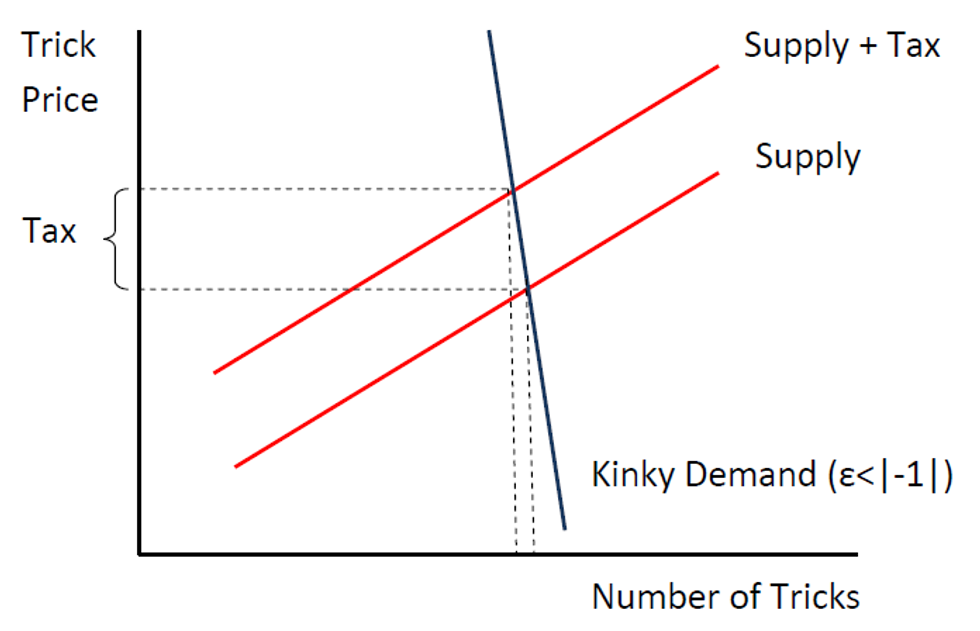 This blog is for everyone who sat through a first-year economic class wondering why their professor couldn’t come up with better examples than guns and butter and for teachers of economics who would like their students to periodically look up from their phones. Here I explain basic economic terms using examples that mothers would never approve.

Demand Curve: A buyer of sexual services will respond to an increase in the market price of sex by reducing the frequency with which he pays for sex on the market. By how much, will depend on his ability to find these services elsewhere. So, for example, a buyer with a preference for sex so kinky that other women are unwilling to participate (for free) will reduce his demand in response to a price increase by less than a buyer who is looking for sex other women might be willing to participate in without being paid. (I like to show my students the prostitute scene from Rat Race as an example).

Supply Curve: A seller of sexual services will respond to an increase in the market prices of sex by increasing the frequency with which he or she sells sex on the market. Overall market supply might increase because existing sellers are turning more tricks, or because other potential sex workers entered the market when the price paid increased above their reservation wage.  Sex workers may also migrate to places where prices are high, increasing the local supply of market sex. So, for example, if a big sporting event brings more buyers to a city (an increase in demand that puts upward pressure on the price of market sex) then sex workers will move to that area, increasing the supply in response to the increase in price.

Opportunity Cost: If women who become sex workers forfeit their ability to marry, then part of the ‘opportunity cost’ of becoming a sex worker is forgone income from marriage. Other opportunity costs to sex work include the risk of disease, arrest and violence. It is these opportunity costs that increase the price charged by sex workers above the wage they would receive from alternative employment, which for many women would be unskilled labor. This brings us to another economic concept: compensating wage differential. This is the additional wage workers require to motivate them to accept a job that is otherwise unpleasant or dangerous.

Comparative Advantage:  This is the ability of one individual, or country, to produce a good or service more efficiently (i.e. at a lower cost) than another. Less developed countries have a comparative advantage in providing services to sex tourists if individuals in those countries have limited alternative forms of employment. So while men in the US, for example, can earn more working in the non-sex labor market, men in the Caribbean have limited employment alternatives and are willing to work in the “sex holiday” market at a lower price. This comparative advantage in sex services encourages the development of that sector in developing nations and increases trade between countries.

Efficiency wages:  Sometimes the wage workers are paid by their employer is not determined by just supply or demand. There is some evidence that pimps pay sex workers efficiency wages, i.e., they are paid more than sex workers without pimps. This is either because they cannot directly supervise their activities, but they want to encourage them to be productive, or because they are willing to pay a premium to keep the best sex workers. (Long time Dollars and Sex readers will remember the pimp that I interviewed who definitely did not pay efficiency wages, or any wages at all for that matter)

Monopoly: Marriage is the most common form of a monopoly, which is the situation when a market has only one seller of a good or service. Economists in general find that monopolies are inefficient in that they both reduce the supply of a good or service below its desired level and increase the price. Some people who are married might agree with that assessment.

Monopsony: Polygamy is an example of monopsony, which is the situation when a market only has one buyer and multiple sellers. Institutionalized polygamy (that is dictated by law) is an unnatural monopsony that excludes would-be sellers from entering the market and leaving them, in this particular example, angry and frustrated.

Negative Externalities: Sometimes markets impose costs on others who are not directly participating in the market. If an active sex trade increases the transmission of STIs among those actively participating in the market and those who are not participating (for example, to wives and girlfriends) then an argument can be made for government intervention to reduce these negative externalities. One way to do this is increase the price of sex services (for example, by imposing a tax) which should reduce the number of transactions. Of course this would only work if buyers reduced their demand in response to the tax increase in prices. So a tax in a market where the buyers all want kinky sex, as described above, would reduce the negative externalities by less than one in a market in which buyers satisfy their needs with non-market sex. (This is how I teach my students Price Elasticity of Demand)

Technological Change: Innovators only invest in new technologies if they believe that the cost of invention is exceeded by the potential financial return on that investment. The opportunity for financial return is directly related to the size of the market so that where there are large markets there is greater investment in new technologies and rapid technological change. The pornography industry is one example of where the size of the market has spurred rapid technological change which has often spilled over into other sectors. This also an example of positive externalities.

I hope that this post is a reminder that not only can economics tell us something about sex and love, but that sex and love is a fun way to learn about economics which is why I started writing this blog (a year ago this week!) in the first place.

I hope you enjoy this illustration which is straight out of my lecture notes.