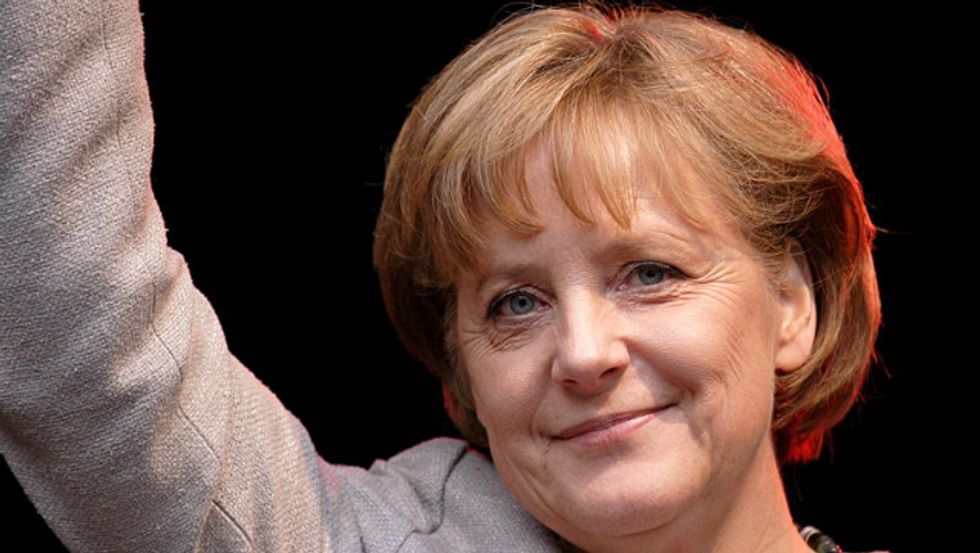 I don’t think so! In the last one hundred years Germany has made two attempts to own, control and dominate Europe. Each has been repulsed. Can this third attempt succeed? I don’t think so! France, as has always been the case, is the weak sister concealing its own financial disaster; and will be gobbled up should the duo achieve its goal of European dominance. Now, imagine the people of Greece, Italy, the Benelux countries, Eastern Europe, etc. suddenly waking up one morning, their governments having signed a surrender document mortgaging the peoples’ standard of living to the Axis ad infinitum. I don’t think so!

The idea of controlling Europe by giving little more than a short term loan (designed to save the German export market) to countries that will not be able to live to the disciplines already agreed to is without precedent. Even the United States has accompanied its need for dominance with substantial long term gifts and support to those who were willing to be dominated. The U.S. barely monitors where the money ends up if the regime in power accepts its policies – and America actually was among the winners in the aforementioned wars. Will the people of Europe accept economic servitude for the foreseeable future? I don’t think so!

If we didn’t learn from the post World War I world of fiscal retrenchment (producing the Weimar Republic, the Depression, Hitler and World War II), if we didn’t learn from previous periods of retrenchment we should, at least, acknowledge the present: England, Greece, Portugal, Spain, France, Germany, etc. are in rapid economic decline, having depended on monetary measures and fiscal shrinkage in their attempts to achieve or maintain balanced budgets. Balanced budgets and fiscal shrinkage are not the solutions to Europe’s or the rest of the world’s recessions. Only fiscal stimulus will enable us to turn the corner rapidly. Otherwise we are facing a very long term recession (read Depression).

In America the people have begun to react (rarely seen here). The Occupy WallStreet (read SAVE Wall Street) objectors around the nation, the unions and the average man in the street are getting angry. Their anger will reverberate in the next elections. More liberal economic thinking will take hold and the U.S. will use the fiscal tools available to cure the malaise.
The people of Europe are more often and more violently seen as actively pursuing their economic needs. They will not permit their countries to be pushed into the morass of long term poverty. Germany may think this route is its route to achieving control over Europe. This will be its third try in only a hundred years.Will it succeed? I don’t think so!

Below I've posted a copy of a letter from Alan Grayson, which was sent to me by a friend. If this letter, which refers to the first independent audit of the Fed, is correct then I was wrong when I said $12 trillion was committed to “saving” the banks. Grayson documents $26 trillion. His sources seem impeccable – the Fed books and records!

The Fed Bailouts: Money for Nothing

I think it's fair to say that Congressman Ron Paul and I are the parents of the GAO's audit of the Federal Reserve. And I say that knowing full well that Dr. Paul has somewhat complicated views regarding gay marriage.

Anyway, one of our love children is a massive 251-page GAO report technocratically entitled "Opportunities Exist to Strengthen Policies and Processes for Managing Emergency Assistance." It is almost as weighty as that 13-lb. baby born in Germany last week, named Jihad. It also is the first independent audit of the Federal Reserve in the Fed's 99-year history.

Feel free to take a look at it yourself, it's right here. It documents Wall Street bailouts by the Fed that dwarf the $700 billion TARP, and everything else you've heard about.

I wouldn't want anyone to think that I'm dramatizing or amplifying what this GAO report says, so I'm just going to list some of my favorite parts, by page number.

Page 131 - The total lending for the Fed's "broad-based emergency programs" was $16,115,000,000,000. That's right, more than $16 trillion. The four largest recipients, Citigroup, Morgan Stanley, Merrill Lynch and Bank of America, received more than a trillion dollars each. The 5th largest recipient was Barclays PLC. The 8th was the Royal Bank of Scotland Group, PLC. The 9th was Deutsche Bank AG. The 10th was UBS AG. These four institutions each got between a quarter of a trillion and a trillion dollars. None of them is an American bank.

Pages 133 & 137 - Some of these "broad-based emergency program" loans were long-term, and some were short-term. But the "term-adjusted borrowing" was equivalent to a total of $1,139,000,000,000 more than one year. That's more than $1 trillion out the door. Lending for these programs in fact peaked at more than $1 trillion

Page 205 - Separate and apart from these "broad-based emergency program" loans were another $10,057,000,000,000 in "currency swaps." In the "currency swaps," the Fed handed dollars to foreign central banks, no strings attached, to fund bailouts in other countries. The Fed's only "collateral" was a corresponding amount of foreign currency, which never left the Fed's books (even to be deposited to earn interest), plus a promise to repay. But the Fed agreed to give back the foreign currency at the original exchange rate, even if the foreign currency appreciated in value during the period of the swap. These currency swaps and the "broad-based emergency program" loans, together, totaled more than $26 trillion. That's almost $100,000 for every man, woman, and child in America. That's an amount equal to more than seven years of federal spending -- on the military, Social Security, Medicare, Medicaid, interest on the debt, and everything else. And around twice American's total GNP.

Pages 3 & 4 - In addition to the "broad-based programs," and in addition to the "currency swaps," there have been hundreds of billions of dollars in Fed loans called "assistance to individual institutions." This has included Bear Stearns, AIG, Citigroup, Bank of America, and "some primary dealers." The Fed decided unilaterally who received this "assistance," and who didn't.

Pages 101 & 173 - You may have heard somewhere that these were riskless transactions, where the Fed always had enough collateral to avoid losses. Not true. The "Maiden Lane I" bailout fund was in the hole for almost two years.

Page 4 - You also may have heard somewhere that all this money was paid back. Not true. The GAO lists five Fed bailout programs that still have amounts outstanding, including $909,000,000,000 (just under a trillion dollars) for the Fed's Agency Mortgage-Backed Securities Purchase Program alone. That's almost $3,000 for every American.

Page 126 - In contemporaneous documents, the Fed apparently did not even take a stab at explaining why it helped some banks (like Goldman Sachs and Morgan Stanley) and not others. After the fact, the Fed referred vaguely to "strains in the financial markets," "transitional credit," and the Fed's all-time favorite rationale for everything it does, "increasing liquidity."

81 different places in the GAO report - The Fed applied nothing even resembling a consistent policy toward valuing the assets that it acquired. Sometimes it asked its counterparty to take a "haircut" (discount), sometimes it didn't. Having read the whole report, I see no rhyme or reason to those decisions, with billions upon billions of dollars at stake.

Page 2 - As massive as these enumerated Fed bailouts were, there were yet more. The GAO did not even endeavor to analyze the Fed's discount window lending, or its single-tranche term repurchase agreements.

There is one thing that I'd like to add to this, which isn't in the GAO's report. All this is something new, very new. For the first 96 years of the Fed's existence, the Fed's primary market activities were to buy or sell U.S. Treasury bonds (to change the money supply), and to lend at the "discount window." Neither of these activities permitted the Fed to play favorites. But the programs that the GAO audited are fundamentally different. They allowed the Fed to choose winners and losers.

So what does all this mean? Here are some short observations:

(1) In the case of TARP, at least The People's representatives got a vote. In the case of the Fed's bailouts, which were roughly 20 times as substantial, there was never any vote. Unelected functionaries, with all sorts of ties to Wall Street, handed out trillions of dollars to Wall Street. That's now how a democracy should function, or even can function.

(2) The notion that this was all without risk, just because the Fed can keep printing money, is both laughable and cryable (if that were a word). Leaving aside the example of Germany's hyperinflation in 1923, we have the more recent examples of Iceland (75% of GNP gone when the central bank took over three failed banks) and Ireland (100% of GNP gone when the central bank tried to rescue property firms).

(3) In the same way that American troops cannot act as police officers for the world, our central bank cannot act as piggy bank for the world. If the European Central Bank wants to bail out UBS, fine. But there is no reason why our money should be involved in that.

(4) For the Fed to pick and choose among aid recipients, and then pick and choose who takes a "haircut" and who doesn't, is both corporate welfare and socialism. The Fed is a central bank, not a barber shop.

(5) The main, if not the sole, qualification for getting help from the Fed was to have lost huge amounts of money. The Fed bailouts rewarded failure, and penalized success. (If you don't believe me, ask Jamie Dimon at JP Morgan.) The Fed helped the losers to squander and destroy even more capital.

(6) During all the time that the Fed was stuffing money into the pockets of failed banks, many Americans couldn't borrow a dime for a home, a car, or anything else. If the Fed had extended $26 trillion in credit to the American people instead of Wall Street, would there be 24 million Americans today who can't find a full-time job?

And here's what bothers me most about all this: it can happen again. I've called the GAO report a bailout autopsy. But it's an autopsy of the undead.