Experts at Davos: "It is in men’s interest to embrace gender equality"

Here are five points from the World Economic Forum at Davos that can help men and women work together for gender equality. 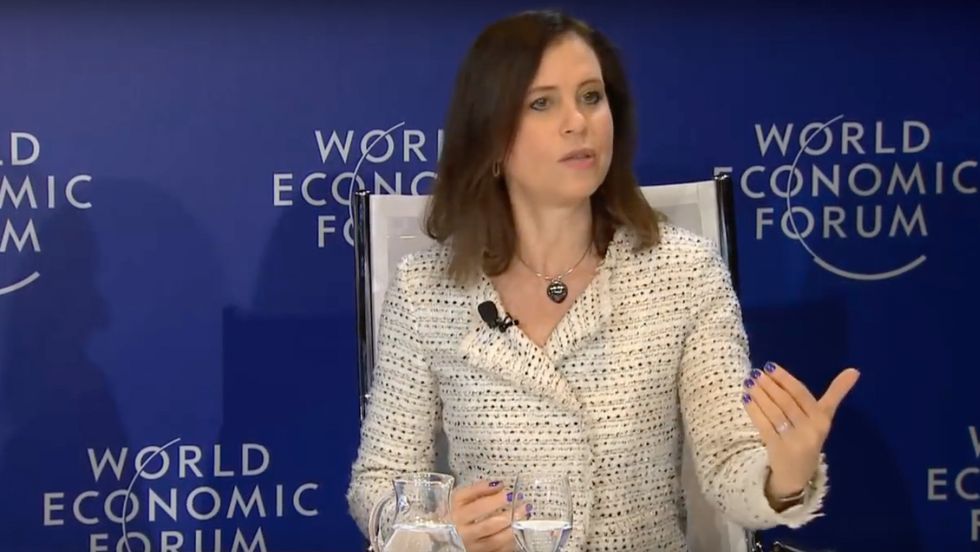 Editor in Chief of USA Today Joanne Lipman in discussion with Gary Barker and Saadia Zahidi at Davos 2018.

Yesterday, at the World Economic Forum taking place in Davos, panelists discussed the measures that need to be taken to stop sexual harassment and how not to lose the momentum generated by the #metoo movement.

Joanne Lipman, Editor in Chief of USA Today and author of the book That's What She Said: What Men Need to Know (and Women Need to Tell Them) About Working Together, pointed out that while every woman knows what it feels like to be marginalized, interrupted, underestimated, or disrespected, these issues for years have only been discussed amongst women. Lipman insists that if we want to close the gender gap, we need to bring men into the conversation. Gary Barker, President and CEO of Promundo agreed. For 20 years Promundo has worked in over 40 countries around the world to promote gender justice and prevent violence by engaging men and boys in partnership with women and girls.

According to Barker, not enough is being done to engage men and particularly to show how the movement is relevant to them. He says that men also suffer from the stereotypical image of manhood and that men who live a more equitable version of it are healthier and happier.

“We have a stake in it, not only because it is right for women and girls and the world, but because it also allows men to be what they want to be. It is in men’s interest to embrace gender equality," Barker says.

Lipman adds that there are many men who would like to be part of the conversation but have been left out by women or by their lack of knowledge of the issues. However, once men are educated, they are typically willing to make a change. Here are five points from the panel that can benefit every workplace and relationship.

Lipman gives an example with the problem of interruption, where even Supreme Court justices are three times more likely to be interrupted if they are women. She also cites the creator of several popular TV shows, who noticed that the ideas women pitch in the writer’s room were not coming through, exactly because they were being interrupted by men. He introduced a new rule of no interruptions during pitches, which increased the number of accepted ideas pitched by women.

What's with the tears?

Another example Lipman gives are the differences in the way men and women communicate that often lead to misunderstandings. Women cry more often than men, but contrary to what men believe it is not due to hurt feelings but out of anger and frustration. Acknowledging this and addressing the cause of anger is a better solution than avoiding conflict with women out of the belief that it will hurt their feelings.

Research shows that another reason why men are hesitant to take active part in the gender equality movement is fear. Of the men Lipman has interviewed, 74% say they are afraid of losing status amongst other men, a problem that needs to be solved at a cultural level as well as in the workplace, where managers need to make clear they expect men to take parental leave, for example. A study done by Promundo amongst 18- to 30-year-old men from the US, UK and Mexico found that 1 in 5 to 1 in 3 has carried out some kind of harassing or bullying behavior against women, girls or other men in the last month. Neither education, nor income, nor ethnicity were predictive of the results. The only thing that mattered was the level of belief men had in the stereotypical version of manhood, in which they expect themselves to be in charge and act as the tough guy.

Unconscious biases and cultural norms that create the stereotypical images of men and women exhibit their influence from early childhood. Lipman points out that mothers of infants routinely overestimate how quickly their sons learn how to crawl and underestimate that for their daughters. Google searches asking, “Is my child a genius?” are 2.5 times more likely to refer to a boy rather than a girl.

Biases persist in school as well, even though teachers are mostly female. When math tests of first graders were graded anonymously girls outscored the boys. The opposite happened when the names were left on.

Similar tendencies are noticed later in life. In college a girl needs to get an A in order to be perceived at the same level as a boy with a B. At work men are seen as 2.5 times more competent than their female counterparts.

“Sexual harassment is a symptom of gender inequality," says Barker, "and if we only focus on the men in top positions we’ve missed the point. We need to do the whole package—adequate reporting, protection of women who come forth, and also go upstream and have conversations with our sons."

“The number one thing that we can do is make sure that we have men who are engaged in leadership. It is simply not enough for a leader of a company or any organization to offload this on to the HR department or anywhere else. It has to come from the top and it has to set the culture of any organization and that’s how we will affect real change."

Watch the full panel discussion below: