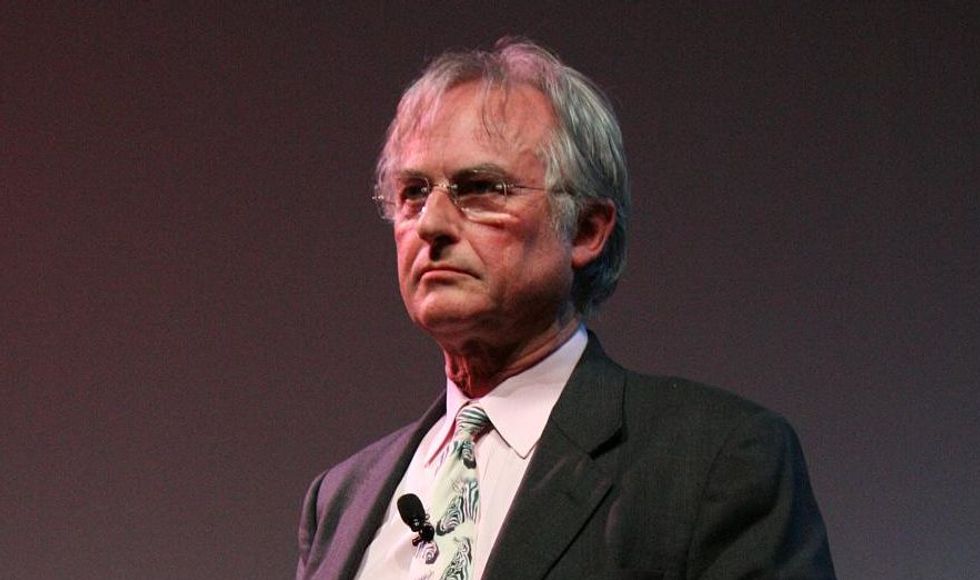 LONDON, February 22 - It's been a rough week for Richard Dawkins, prominent evolutionary biologist and noted God-hater. Our reporters can reveal that on Monday, while Dawkins was ordering breakfast at a local shop, he received the wrong change for his coffee and muffin, but failed to count it and notice the error until he was a short distance away, when walking back would have been mildly inconvenient. Then, while consuming the items, he carelessly spilled a blotch of coffee on his pants leg, slightly discoloring the fabric. Finally, while walking back to his home, he was caught in a brief rainshower for which he had foolishly neglected to bring an umbrella, resulting in his jacket becoming damp! Do these humiliating blunders spell the imminent collapse of the aggressive, militant, aggressively militant New Atheist movement which Dawkins single-handedly created and for which he is the sole representative?

I kid, of course, but this seems to be the tone in media coverage of Richard Dawkins these last few days. All of a sudden, there's been a frenzy of assaults whose smug, triumphalist tone is belied by the utter triviality of their subject matter.

First, there was this radio appearance, in which Dawkins was discussing a survey which found that two-thirds of Christians can't name the first book of the New Testament (that would be Matthew, of course). He was challenged by a clergyman to name the full title of Origin of Species, which he got partially right but stumbled near the end. (For the record, the full title is On the Origin of Species by Means of Natural Selection, or the Preservation of Favored Races in the Struggle for Life.)

Obviously, there's a significant difference between recalling this Victorian mouthful verbatim, and Christians who can't remember the single-word name of the first book of the NT. But the more important point is that Origin doesn't stand in the same relationship to Richard Dawkins as the Bible does to a Christian. Darwin was a brilliant and diligent scientist whose book launched a revolution in biology, but it isn't infallible holy writ. He got the key ideas right, but had some of the details wrong, and much of his work has been built upon, clarified, or superseded by other scientists who lived in the hundred and fifty years since its publication. To biologists today, Origin is of mainly historical interest. None of these excuses are available to a Christian who believes that the Bible they hold in their hands is the literal word of God.

Second, and more bizarre still, was this journalistic hit-job by Adam Lusher published in the Sunday Telegraph. At the core of it is the assertion that Richard Dawkins should be ashamed, because - wait for it - one of his ancestors from the year 1744 owned slaves! No, I'm not kidding:

Now Richard Dawkins, the secularist campaigner against "intolerance and suffering", must face an awkward revelation: he is descended from slave owners and his family estate was bought with a fortune partly created by forced labour.

One of his direct ancestors, Henry Dawkins, amassed such wealth that his family owned 1,013 slaves in Jamaica by the time of his death in 1744.

In an even more ludicrous attempt to make this seem relevant, Lusher suggested that Dawkins "could have inherited a gene from supporting slavery" from his three-centuries-ago ancestor. This is one of the most laughably ignorant bits of pseudoscience I've ever heard, and considering how many creationists I've dealt with, that's really saying something. There's no reason to believe that Richard Dawkins has the slavery-supporting gene, but I'm pretty sure that Adam Lusher has the bad-journalism gene.

I'm astonished that any editor worth his salt would have deemed this lazy, irrelevant "revelation" worth publishing. We're all aware that societies of the past sanctioned practices which we now recognize as deplorable. Insofar as it's in our collective power to make up for the lingering inequalities born of ancient injustice, we should do so. But to suggest that this is a matter of individual responsibility, as if each of us had an obligation to rewind the clock of history and personally make right any misdeed committed by any of our ancestors, is absurd. No person bears blame for the crimes of someone else, especially not someone long dead. If Lusher is so incensed by long-ago injustice, why didn't he aim his fire at the British monarchy, or at the many churches and cathedrals in the U.K. and across Europe, whose grand holdings unquestionably were built up with the proceeds of slave labor?

What makes this so ironic is that, as Richard Dawkins himself has pointed out, we all share the same small pool of ancestors. The mathematical laws of inheritance guarantee that this is so: for any given population, you don't have to go back very far at all - generally, only a few tens of generations - before you reach a point in time where every person, whether noble or slave, royalty or commoner, either has no living descendants or is the ancestor of everyone now living. (The chapter titled "The Tasmanian's Tale" in Dawkins' The Ancestor's Tale explains why this is true.) It's just that in a few special cases, we can trace the lines of descent backwards. If we try to redress all of history's injustices - and why would we stop at the 18th century, after all? - we'll soon find we're paying reparations to ourselves.

As my opening paragraph showed in satirized form, Dawkins' enemies are trying to exaggerate the importance of meaningless facts to get a foothold they can use to attack him, and by extension the entire atheist movement. The very fact that they're grasping at these fragments of straw shows how little purchase they've really gotten. What they're really upset about, obviously, is that the atheist message Dawkins and others so ably advocate is finding so many receptive listeners. But if they can't face us and answer our arguments in the arena of reason, all the phony, drummed-up pseudoscandals in the world aren't going to slow that momentum.