Americans Are Having a Lot Less Sex, Say Researchers. Is Tech to Blame?

Married Americans are now having sex 11 fewer times per year than in 2002, according to a new study published in the Archives for Sexual Behavior. What is causing this dramatic change? 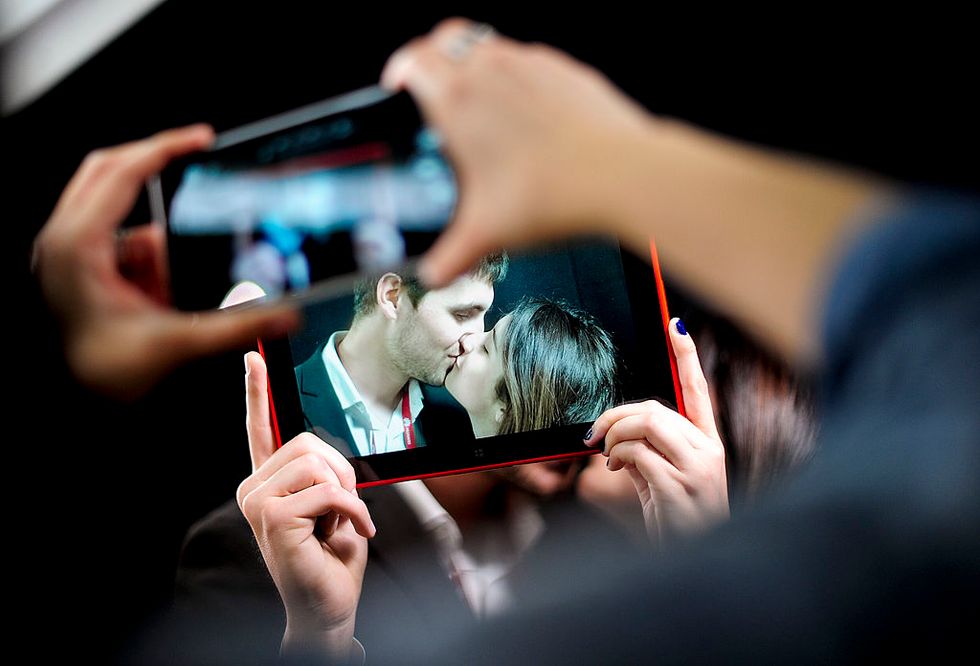 We may be sleeping with Siri--but that's about it.

American couples are now having sex much less frequently than before the rise of smartphones, social media, and Netflix, according to a new study published in the journal Archives of Sexual Behavior. Married couples now have sex 11 times fewer each year (from 67 to 56) than in 2002. Before this time, sexual frequency was relatively static.

Why Does the Rise of Social Networks and Smartphones Coincide with a Decrease in Sex?

While there are many culprits that impact sexual activity, such as depression and American's decreasing levels of happiness, the researchers point out that the rise of our media consumption (which offers an alternative to sex) may be a factor.

"The ubiquity of entertainment and social media options in recent decades, from streaming video to gaming to Facebook, may also make sexual activity just one of an array of pleasurable options."-Declines in Sexual Frequency amoung American Adults, 1989-2014.

Researchers relied on data from the General Social Survey, which since 1989 has been asking a representative sample of Americans about their sexual frequency. The sexual frequency for married couples was relatively stable (even going up from 1989 to 1999), until taking a major nosedive at around 2002.

Sure, they weren't able to binge-watch Breaking Bad in 1969. But Jane Birkin and Serge Gainsboug did have more sex than you.

Whatever Happened to Hookup Culture?

We read a lot about the ubiquity of apps that make finding sexual partners quite easy. Many breathless articles, such as Vanity Fair's Tinder and the Dawn of the "Dating Apocalypse," seemingly provide a window into hookup culture and the ease of finding sex today. But despite the rise of Tinder and other sites popular with twentysomethings, the demographic of 18-29-year-olds saw their sexual frequency decrease.

Millennials and Gen Z are having sex less often than their grandparents did.

There's No App for Libido

In 2014, a sexually-frustrated husband sent his wife an Excel spreadsheet listing all of the reasons she gave--such as watching a rerun of Friends--for not wanting to have sex with him. She posted the list on Reddit and it went viral. The incident elicited heated arguments about both the husband's and wife's activity, but one thing was clear: there was a breakdown in typical face-to-face interactions between the couple regarding their sex life (or lack of it).

When we filter everything through the prism of tech, problems ensue. At around the same time the disgruntled-husband-using-Excel story took off, an app called Spreadsheets was gaining media attention. The app sought to gamify your sex life, using your smartphone's accelerometer and microphone to track the movement and audio levels of your sex activity.

Spreadsheets has since gone kaput.

"We are exhausted doing it all, and never doing it. And when we are doing it, we're checking our smartphones. Ten percent of people check their smartphones during sex. Thirty-five percent directly after. We are connected to the internet, and disconnected from our would-be lovers." -Maureen McGrath, from her TEDx "No Sex Marriage–Masturbation, Loneliness, Cheating and Shame"

While there is a diverse range of issues that impact sexual frequency, it is curious that a major decrease in couples having sex coincides with a cataclysmic change in how we connect with the world and each other. Our smartphones provide us a wealth of information and connections, but also an easy method of escaping intimacy.

It may be time to put down our phones and pick up our significant others.

Want to connect with me? Reach out @TechEthicist and on Facebook. Exploring the ethical, legal, and emotional impact of social media & tech.

“Every time you check your phone in company, what you gain is a hit of stimulation, a neurochemical shot, and what you lose is what a friend, teacher, parent, lover, or co-worker just said, meant, felt.” -Sherry Turkle, from Reclaiming Conversation: The Power of Talk in a Digital Age