Karthik Nemmani, an eighth-grader from Texas, was declared champion of the 2018 Scripps National Spelling Bee on Thursday after spelling koinonia, meaning “the Christian fellowship or body of believers.”

Karthik clinched the contest after the other remaining contestant, 12-year-old Naysa Modi, misspelled the German word bewusstseinslage, defined as “a state of consciousness or a feeling devoid of sensory components.” Karthik began shaking his head when Naysa missed the second S.

“She’s a really, really good speller. She deserved the trophy as much as I did,” said the soft-spoken Karthik. “I got lucky.”

Naysa, a four-time national contender also from the Dallas area, had actually beat out Karthik in a county-level spelling bee earlier this year. In the past, that loss would have disqualified Karthik, but he was able to compete in Maryland thanks to a new wild-card program that lets kids enter even if they’ve never won a regional competition. His family did have to pay for lodging and a $750 entry fee, though.

It paid off. Karthik won the national title and more than $40,000 in prizes after he spelled out obscure words like condottiere (knight or roving soldier available for hire), miarolitic (of igneous rock), cendre (a moderate blue), ankyloglossia (limited normal movement of the tongue), grognard, and jagüey (an East Indian tree).

Before spelling the winning word koinonia, which is derived from Greek and most commonly pronounced “koy-nuh-NEE-uh,” Karthik had to spell haecceitas, a latin word meaning the state of being an individual. 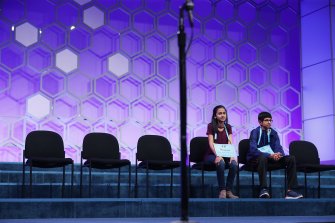 This year’s spelling bee, held at the Gaylord National Resort & Convention Center in Maryland, lasted three days and included a record-breaking 515 contestants ages 8 to 15. Only 16 contestants remained on Thursday night, and almost half of them misspelled their words.

Karthik is the 14th-consecutive Indian-American to win the championship, a pattern that’s likely explained in part by cultural emphasis on education, and the existence of a spelling bee circuit exclusively for spellers of South-Asian descent.Shalini Shankar, an associate professor of anthropology and Asian-American studies, told Time:

“Among the elite classes in India, both economically and socially elite, there’s a real emphasis on education and the use of education for social mobility. It’s not so different from other places in the world, but it’s certainly quite prevalent there. So I think that value is one that gets very magnified when you look at what Indian-American populations actually emigrated.”

The contestants in this year’s contest took their losses gracefully. One 12-year-old girl, after missing her word, said softly “OK, bye. And good luck to the rest of you.”

Karthik also accepted victory over his Texas rival with class.

“I wouldn’t say it was revenge,” he said. “We weren’t against each other. We were against the dictionary.”

A new study says the reason cave paintings are in such remote caverns was the artists’ search for transcendence.
Up Next
Mind & Brain

“Our country doesn’t do many things well, but when it comes to big occasions, no one else comes close,” so claimed an instructor I heard at the gym this week. […]