Artist Robert Smithson was “insane,” one critic jokes in Troublemakers: The Story of Land Art, a film by James Crump, which made him “easy to get along with.” In the late 1960s and early 1970s, a generation of American artists challenged the art world with epic land art — work that manipulated the Earth itself to create a soul-stirring experience. These madmen (and women) turned their backs on the city-based, gallery-centric art economy and literally went off into the desert to create prophetic works such as Smithson’s Spiral Jetty. Crump’s Troublemakers celebrates these rebels while raising the vital question of where today’s troublemakers will come from. 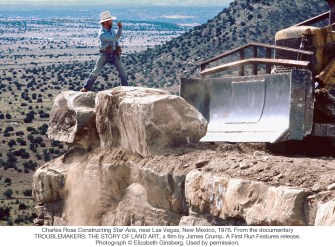 Crump, a curator and art historian in addition to being a filmmaker, specializes in modern and contemporary art. His previous art documentary, Black White + Gray, explored the professionally and personally symbiotic relationship of controversial artist Robert Mapplethorpe and curator-collector Sam Wagstaff. In Troublemakers, his second film, Crump brings that same level of deep insight and human interest to the story of the land artists. Using archival photographs (example above) and grainy “making of” film footage, Crump places you there at the creation. He also evokes the spirit of the age by showing how the Vietnam War, budding environmentalism movement, increased interest in ancient ruins and civilizations, and even the “Earthrise” images taken from trips to the moon all coalesced in the artists’ minds to compel them to create monumental art that nobody could own or sell and to defy the commodity-driven art gallery world. 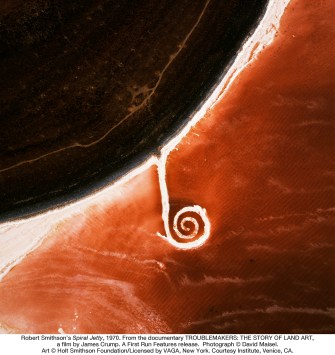 If Troublemakers has a “star,” Smithson is it. Spiral Jetty (shown above), despite long periodic submersions in the Great Salt Lake, remains the quintessential piece of land art rising above all others in the public memory. Smithson, who died tragically at 35 years of age in a plane crash while scouting a location for a new piece, appears in Troublemakers as both an angel of artistic aspirations and a devil in disguise for the general art world. Virginia Dwan — friend, curator, and patron of Smithson and others — recounts standing on the newly built Spiral Jetty, surrounded by the blood-red, algae-laden water, and feeling “something devilish” about the “infernal” scene. Smithson railed against “the Disneyland experience” of nature and offered instead nature “red in tooth and claw.”Spiral Jetty, seen in this light, amounts to a curled up, metaphorical middle finger to those who would control, dominate, and ultimately destroy the Earth. 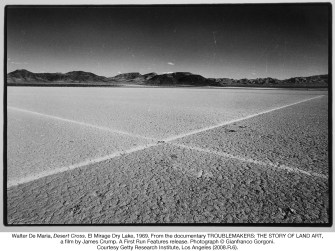 Although Smithson shines brightest, Crump finds room for other artists, most notably Walter De Maria. Like Smithson, De Maria left a mark on the landscape with works such as Desert Cross (shown above). Unlike Smithson, however, De Maria gave few interviews, posed for few pictures, and remained a loner up to his death in 2013. What also separates De Maria from Smithson is the way we encounter his art. Most people “know” land art through pictures and videos, unable or unwilling to trek out to the remote deserts and other places such art lives in. In The Lightning Field, De Maria’s signature work, he arrayed 400 stainless steel poles in a grid in a remote part of New Mexico. Visiting The Lightning Fieldrequires following a set of instructions on the scale of a medieval religious pilgrimage. But it’s that pilgrimage element (which De Maria takes to the extreme) that makes all land art so vital. Its very inaccessibility demands your effort. To get there you need to want to be there, because when you get there, you need to be present, to be part of the art, participating rather than passively receiving. 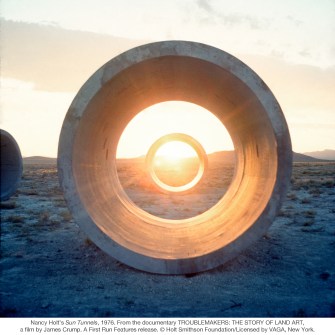 Crump also finds room for the forgotten figures of land art, particularly the key women. In addition to Dwan, who provided the necessary exposure and finances, Nancy Holt (collaborator and wife of Smithson) created works such as Sun Tunnels (shown above) that manipulated not just the Earth, but also the Earth’s relationship to the surrounding cosmos, a relationship made stunningly clear by NASA’s “Earthrise” photos of the “big blue marble” tumbling through space. Another key figure resurrected by Crump is Willoughby Sharp, an independent curator who recognized land art’s troublesome, but necessary ethos early on and tried to preach their doctrine through his progressive art journal Avalanche. When the moneyed, status quo art world threatened to silence these renegade artists by exclusion, Sharp, Dwan, and others heroically fought back against all the odds. 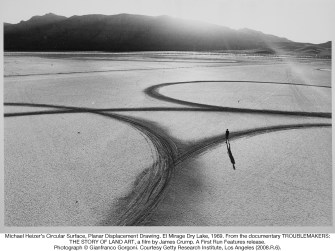 Perhaps the true “sleeper” figures in Troublemakers, and perhaps the most subversive, is Michael Heizer. Dwan points out that, although Smithson broke out onto the scene earlier and continues to enjoy fame, Heizer did land art first and may eventually eclipse even Smithson.  The gun-wielding, motorcycle-riding (to create Circular Surface, shown above), desert-dwelling Heizer exemplifies the “obsession” that Dwan says first drew her to land art. While Spiral Jetty and The Lightning Field have their place, I found myself enthralled by Crump’s aerial footage of Heizer’s Double Negative, two man-made trenches straddling a natural canyon in the Nevada desert, and hoping to one day make the long pilgrimage to stand inside those gashes in the ground revealing the strata of ages — a literal time machine calling us back to our beginnings.  The point, of course, is being there, but Crump’s Troublemakers will more than do until you can make your pilgrimage. 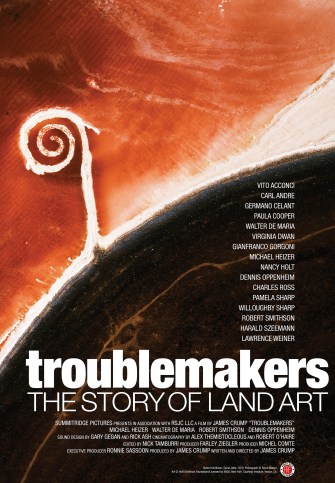 Amazingly, Heizer still lives and works in the desert. Since 1972, he’s toiled on City, a vast complex of earthworks buildings in the Nevada desert still closed to the public. When/if Heizer finishes, City will be one of the largest sculptures ever made — a pre-fabricated (so to speak) ruin on the Chichen Itza and other ancient sites his archaeologist father introduced him to in his youth. Finally, perhaps, Heizer will have achieved the “atmosphere of awe” he hoped to instill in all his works.  With yet another story of an impending, inevitable “severe correction” to the art market bubble, you wonder who the renegades and troublemakers of today will be to pick up the pieces. Troublemakers: The Story of Land Art looks back to the conflicted days of the late ‘60s/early ‘70s while pointing us forward to our own conflicted age, offering a “severe correction” of its own. As Crump’s film points out, land art dreams of lasting for eternity while accepting the death-dealing entropy of time. Perhaps the real climate change we should be talking about is a change in how we see the Earth itself — as our home, our prime obligation, and our greatest work of art.

Turns out, it’s not comets.