Does it seem like albums are getting longer? Boy, are they ever, at least some of them. Crazy long, like Chris Brown’s Heartbreak on a Full Moon, a 45-song album whose release was accompanied with a plea from him that laid out the calculus behind getting a hit these days. It’s a bit bizarre, and surprising to those of us who aren’t music-industry bean-counters.

Heartbreak isn’t even a double album, a concept that’s, well, doubly meaningless in 2017 — albums themselves barely exist in this era of streaming music. It’s all about individual songs and the number of times they’re played on internet or cellular streaming services to which listeners subscribe, like Apple Music or Google Play, or “freemium” platforms like Spotify.

In the pre-streaming days, of course, the math was simple for charting publications like industry institution Billboard magazine (What’s a magazine?): Their charts primarily reflected sales, with a little bit of radio-airplay mojo thrown in. 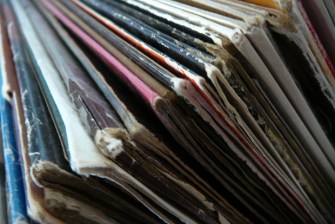 Now, though, few of us bother to actually buy songs when we can just listen stream them whenever and wherever. As a result, plays are a more meaningful measure of success for an artist attempting to persuade backers to finance the live performances at which today’s music stars actually make their money. The amount of money they get from each song played online is pitiful — services vary, but Google Play, for example, coughs up $0.0073 per stream. Outright album sales are so anemic that even music superstars like Steely Dan’s Donald Fagen can no longer live off their record sales. And thus the income model of the last few decades is flipped: Artists can’t get rich off recordings; instead, their hits serve simply as the exposure that makes a fan want to come out and pay for a pricey seat at a show. 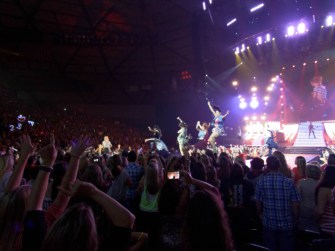 If you’ve been a longtime observer of the music industry, this should ring a bell: It’s a return to the traditional business model of the 1950s and 1960s. Things have jumped backwards in another way, too. When tools like Apple’s Garageband app put a recording studio in everyone’s laptop, anyone can make a record — but once more, as in the 1950s, it’s promotion that brings a very small number up and out of the crowd and into listeners’ ears. Famous-for-being-famous celebs have the best shot at a hit now: Oh, hi, Kylie. Oh, hey, Kim.

So here’s how Billboard’s now calculates its album rankings since 2014.

An artist gets credit for selling one copy of an album if either:

So since ten purchased songs from an album equals the sale of one copy of the album, if someone buys a 20-song album, that counts as two album sales, and so on. Actual sales are pretty straightforward like that.

But the 1,500 streaming plays that count as an album get really interesting when you crunch the numbers:

So we can see that the longer the album, the fewer people have to play the its songs to equal an album sale. This means that to sell a copy of, say, the 45-song Heartbreak on a Full Moon, only 34 people (really 33.333 people) have to stream it. No matter how interminable the album is, we can all agree that 34 people is a stunningly low bar for a well-known celeb like Chris Brown to clear.

So when Brown released his album, he challenged his fan base to get him to #1 on the album streaming charts: 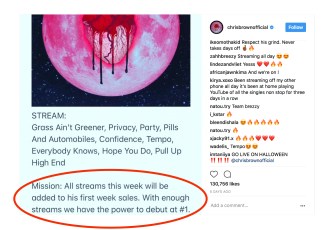 In another, now-deleted Instagram post, he instructed fans to stream the album over and over, or just “leave the album on repeat.”

It seems that Brown’s math works. He’s a mid-level star these days — tainted by allegations of violence against women — but Heartbreak is, as of this writing, #2 in the list of Apple Music’s top 20 albums. (Also #5.) It did hit #1 on Billboard for a moment or two.

This trend isn’t widespread — yet. As of this writing, only two of Apple Music’s 20 are super-sized, one being Brown’s and another being the 22-song Trip from Jhené Aiko at #16. That’s half the size of Brown’s, but still a lot of songs, and therefore pretty much as big a hit, if our math is correct.

It’s fair to ask what standard of quality can be maintained throughout such an extended opus. “Never before have so many songs existed just so an album can have a 20th, 30th, or 40th track,” writes Adam K. Raymond in Vulture. Even an artist you love isn’t likely to keep you engaged for that long: Brown’s album is two hours, 38 minutes long. That requires some commitment. Or maybe it’s just meant to be used as background sonic wallpaper. Either way, whew.

When Netflix Is Attacked at Cannes, Will Smith Steps Up

Just as the collective ruckus of science deniers hits its peak, Netflix announces a date for ‘Bill Nye Saves the World’, a heroic new show that will answer the most pressing science questions of our era.
Neuropsych

Netflix is saving kids’ brains, one non-commercial break at a time

Want five or six extra days every year? Easy – choose streaming over network TV. Adults are sacrificing 130 hours, and kids 150 hours, to ads annually when they watch commercial programming.
Up Next

Would You Take An Exercise Pill?

Lazy but want to stay in shape? You may soon be able to have it both ways, thanks to a new pill in testing from GlaxoSmithKline.