For most Americans, Christmas week represents about half of the time off we will enjoy all year long. Compared with Australians (at least 4 weeks off, plus 10 public holidays), Brazilians (22 days of paid leave with a 33 percent salary vacation bonus) and the French (at least 5 weeks off and as many as 9 for many public employees), we are seriously bereft.

Look at how the United States stacks up against the rest of the developed world in number of mandatory days off each year: 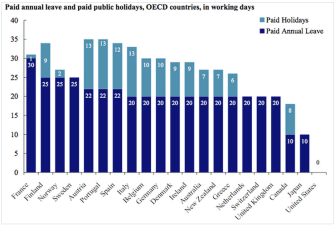 Yes, that’s a big fat goose egg. And yes, the United States is the only OECD country that does not require employers to provide even a day of paid leave to its employees. As the Department of Labor states matter-of-factly, “The Fair Labor Standards Act (FLSA) does not require payment for time not worked, such as vacations, sick leave or federal or other holidays. These benefits are matters of agreement between an employer and an employee (or the employee’s representative).”

Ah, to live and work in the world’s only superpower.

Does it have to be this way?

Recently, Robert Reich put forward a modest proposal that Congress should mandate a minimum of three weeks of vacation for every American worker:

Most Americans only get two weeks off right now. But many don’t even take the full two weeks out of fear of losing their jobs. One in four gets no paid vacation at all, not even holidays. Overall, Americans have less vacation time than workers in any other advanced economy.

This is absurd. A mandatory three weeks off would be good for everyone — including employers. Studies show workers who take time off are more productive after their batteries are recharged. They have higher morale, and are less likely to mentally check out on the job.

This means more output per worker — enough to compensate employers for the cost of hiring additional workers to cover for everyone’s three weeks’ vacation time.

But for the foreseeable future, vacation guarantees are not likely to appear on any lawmaker’s agenda of top priorities any time soon.

Related
13.8
What kind of intelligence is artificial intelligence?
The initial goal of AI was to create machines that think like humans. But that is not what happened at all.
The Present
What’s effective altruism? A philosopher explains
Some effective altruists “earn to give” — they make as much money as they can and then donate most of it to charities.
Sponsored
How to avoid family fights about money
No family is immune to money conflicts, no matter how much they love each other. Here’s what to look out for.
L&D strategy
Best practices for a needs analysis [Templates included]
Conducting a thorough needs analysis requires care, curiosity, and open-mindedness.
Neuropsych
Memory and the benefits of forgetting
Forgetfulness isn’t always a “glitch” in our memories; it can be a tool to help us make sense of the present and plan for the future.
Up Next
Culture & Religion
Russia’s Pro-Gun Lobby Is Finding Its Voice
In the country with the highest murder rate in Europe, a movement that barely existed a year ago makes its case for liberalizing gun laws.