An inability to describe what God is or what a higher power entails is widespread. A new Pew Research study of 4,729 U.S adults found that while nine out of ten Americans believe in such a higher power, they don’t agree on what that actually means.

As the chart below shows, four-fifths of the nation believes in God, while 9 percent of those who do not believe in God claim they “believe in some higher power/spiritual force.” Nearly a quarter of believers feel that this higher force is not what the Bible describes, while 56 percent of believers think the Bible nailed it. One-tenth of the population believes in no higher power. 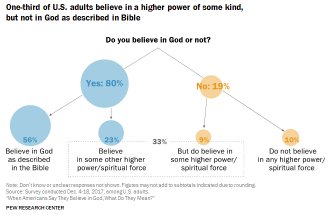 This problem doesn’t only affect the general population. Religious scholars experience similar difficulties in describing the contours of a higher power. In his introduction to the exhaustive two-volume The Norton Anthology of World Religions, Pulitzer Prize-winning author Jack Miles writes that religion is as actively debated by experts as other ambiguous terms, such as music, art, and mathematics.

Some definitions of religion are so loose as to allow almost anything to qualify as a religion. Others are so strict as to exclude almost everything ordinarily taken to be a religion.

Much the same holds true for “God”. Those who believe the Bible got it right envision “an all-powerful, all-knowing, loving deity who determines most or all of what happens in their lives.” Those who lean toward a “spiritual force”, however, don’t have much stock that this power intervenes in life or has omnipotent powers. The boundaries are much wider, yet the definitions prove vaguer.

Nearly half of respondents think this higher power has an active hand in most or every event, while 18 percent say it jumps in “just some of the time.” Yet when contemplating personal moments, those numbers soar: almost 80 percent of adults think God has protected them, while two-thirds have received a reward from God. Interestingly, the judgmental piece is less pronounced: 60 percent rate God as the ultimate judge, while 40 percent claim they’ve been punished by it. 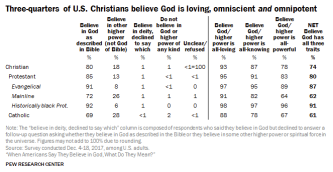 Those aren’t the only skewed numbers. About three-quarters of Americans talk to God, but only 30 percent claim that it talks back. Prayer is the dominant mechanism for this conversation, though 40 percent of respondents claim they don’t pray yet still talk to it. So deeply integrated is this higher power concept into the fabric of consciousness the fact that I’m citing it as “it” instead of the personified (and not gender-neutral) “He” might cause consternation even if grammatically correct. We often imagine God as a larger-scale human in some capacity.

While fascinating, this study is limited. Christians dominate those polled. Jews and agnostics make up a statistically significant portion of the population to offer a separate analysis, but Muslims, Buddhists, and Hindus, among other religious minority groups (in the U.S.), do not. Living in a Christian-dominant nation, however, this study offers important insights into the underlying spiritual beliefs that make up the driving ideologies of the culture.

For example, 93 percent of Christians believe that God (or a higher power) loves everyone regardless of faults. That’s a tremendously high number given the negative social discourse we experience on a daily basis. Nearly as many Christians claim God is omnipotent, while 78 percent claims that it can change world events. Pew reports:

In total, three-quarters of U.S. Christians believe that God possesses all three of these attributes—that the deity is loving, omniscient and omnipotent.

These are expectable data. Yet 70 percent of religiously unaffiliated citizens believe in a higher power. That number includes 17 percent who think the biblical God is the actual representative, while over half state the good book does not capture the essence. Just over a quarter do not believe in any higher power. Agnostics are more likely to claim a higher power exists when compared to atheists; lack of affiliation with any group does not imply they do not believe. 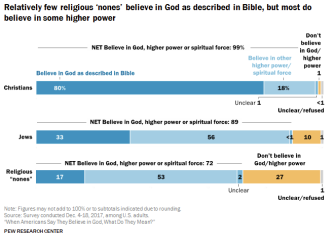 Three factors greatly influence belief: the younger and more educated they are, the less likely they are to believe in the biblical God. As for the third, political affiliation makes a big difference in existential outlook: 70 percent of Republicans put stock in the biblical God, while that number is 45 percent for Democrats. The number also skews for a belief in a higher power, 39 percent versus 23 percent.

If you’re interested, the full study breaks down data by religious affiliation within groups and offers a deep dive into the ways that God supposedly influences the world. Whatever your belief system (or lack of one), this research offers an eye-opening gaze into the varied ideas the citizens of one nation share.

It also offers an opportunity to practice an ancient religious precept: humility. Thinking you and your group alone understand the true representation of a higher power only leads to conflict whenever encountering those with different opinions. That does not make for good communication skills in any society. Babel wins again.

Related
The Future
How the metaverse will revolutionize K-12 and higher education
Imagine going on a tour through the human circulatory system as a tiny cell. That is just one example of education in the metaverse.
Starts With A Bang
Ask Ethan: What are white holes, and do they really exist?
In General Relativity, white holes are just as mathematically plausible as black holes. Black holes are real; what about white holes?
Life
Strange life forms create an “alien” ecosystem in an abandoned uranium mine
Slimy biofilms made up of bacterial and eukaryotic life forms have taken over an abandoned, flooded uranium mine in Germany.
Hard Science
Earth has an eerie “sodium glow,” and astronomers use it to image stars
Air currents in our atmosphere limit the resolving power of giant telescopes, but computers and artificial stars can sharpen the blur.
Health
How saliva changes the flavor of food
“It’s a liquid, but it’s not just a liquid.”
Up Next
Strange Maps
This map turns the San Francisco Bay Area into the Middle East
Thought experiment: What if you graft Israel’s borders onto the San Francisco Bay Area?