We may not always be aware of it, but both children’s media and pop culture are awash in gender-normative attitudes and behaviors. Young children especially are susceptible to gender-related messages. Not only does such media socialize them but it also primes them for gender-specific traits and attitudes.

Generally speaking, boys and girls all over the world are taught gender roles not only through media but also play. Most of the games children play and the toys they play with support gender-normative roles. Such observations have leaked into the nature vs. nurture debate. Is gender identity learned or is it biological?

Researchers at the University of Kent in the UK, led by developmental psychologist Lauren Spinner, investigated this in a recent experiment. The results were published in the journal Sex Roles. In their paper researchers write, “We investigated the impact of stereotypic and counter-stereotypic peers pictured in children’s magazines on children’s gender flexibility around toy play and preferences, playmate choice, and social exclusion behavior.”

They tried to answer the questions: what toys is each sex “supposed” to play with, and how does this affect the child? But this also lends insight into gender itself, and how play leads to skills that children can use later in academics and beyond. 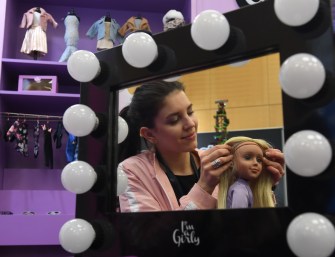 Children absorb messages about gender throughout childhood through the media, pop culture, and marketing campaigns targeting them. Credit: Getty Images.

In each case, a researcher read a text bubble inside the image. One said, “Hello! My name is Thomas, and every day I like to play with my cars. They’re my favorite toys!” While another exclaimed, “Hello! My name is Sarah, and my favorite toy is My Little Pony! I have lots, and play with them every day.” Afterward, each child was allowed to select a toy to play with. They were offered several gender-specific options, such as a jet fighter, a baby doll, a tea set, and a tool kit.

Those who viewed the counter-stereotypic picture were more open to the idea of girls and boys wanting to play with toys for the opposite gender. When asked whether they themselves wanted to play with Thomas with the pony or Sarah with the car, the children who encountered counter-stereotypic images were more likely to say they did. What didn’t change was the children’s own toy preferences. Overwhelmingly, children preferred more gender-typed toys than counter-gender ones. 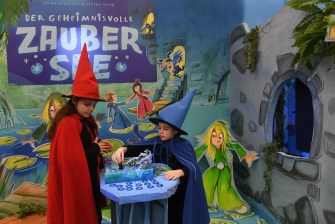 Boys and girls were more comfortable playing together when exposed to counter-stereotypic images. Credit: Getty Images.

At around two or three years old, a child figures out their gender. By four or five, they’re hyper-aware of gender differences and tend to be rigid about them. Then they loosen up about such differences at around age seven. But they still don’t often like to play with opposite-sex playmates. “Children can overcome their anxieties about playing with other-gender children,” Dr. Spinner told the New York Times, “if you can get them to understand there are a lot of similarities in what they like to play with, rather than focusing on the gender of the child.”

So should we allow children to choose toys from the opposite sex or push them toward toys oriented to their own? Dr. Spinner and colleagues suggest encouraging children to play with toys from both genders because it allows them to develop a range of skills. For instance, while boys’ toys tend to build spacial and tactile skills, girls’ toys tend to build communication and social skills. So it seems those parents who encourage more open-mindedness about gender may be helping children build a greater range of skills, while those more rigid about gender may be inadvertently limiting them.

Related
Strange Maps
Dutch government releases a genuine treasure map from WWII, sparking a hunt for the loot
X marks the spot. The Dutch town of Ommeren has been swamped by detectorists armed with shovels looking for $20-million treasure.
Thinking
Creative wisdom from Rick Rubin: embrace your inner gatekeeper
Unlock the full potential of your creativity with “holistic detachment.” This is the way of the editor.
If money doesn’t buy happiness, you’re spending it wrong
These money experts say you can buy happiness. There are some red flags to look out for, though.
▸
7 min
—
with
Lindsay Bryan-Podvin
Starts With A Bang
The path forward for astronomers and native Hawaiians
A history of injustice and the greatest natural location for ground-based telescopes have long been at odds. Here’s how the healing begins.
Thinking
“Give a f***, actually”: The surprising benefits of being grateful for things you dislike
Radical Emotional Acceptance calls on you to celebrate all of life’s emotions — even the negative ones.
Up Next
Strange Maps
Obesity in America vs Europe: Two maps explain it all
If your BMI is higher than 30, you’re technically obese. These maps show how many people per European country (and U.S. state) suffer from that medical condition.