We need to completely rewrite the textbooks on how to teach teachers. That’s according to a new report just publishedby the National Council on Teacher Quality. The report describes a vast and severe failure of teacher-training courses and the textbooks that accompany them to convey evidence-based practices; while delivering unsupported anecdotal evidence and well-debunked myths in spades. The report is accompanied by a letter of support signed by an assortment of professors of psychology and learning sciences from universities around the world.

The report finds that out of 48 texts used in teacher-training programs none accurately described fundamental evidence-based teaching strategies comprehensively. Only 15 percent had more than a single page devoted to evidence-based practices; the remainder contained either zero or only a few sentences on methods that have been backed up by the decades of scientific findings that exist in the field of educational psychology. 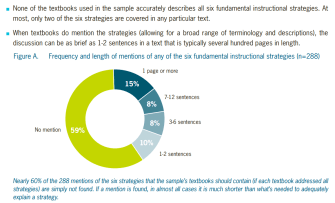 Missing from these textbooks were detailed explanations of six core strategies that have been found to be backed by evidence, which every teacher should know and use. The strategies aren’t new; they were identified by the Institute of Education Sciences, the research arm of the U.S. Department of Education, as being the most effective techniques in all classrooms regardless of age or subject in guidance released in 2007. 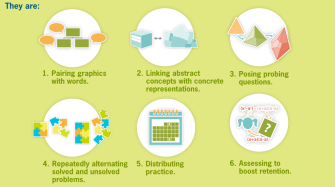 The report didn’t just closely examine textbooks, but also delved into evaluations of entire courses, finding that “aspiring teachers are not being taught — in textbooks or in their coursework and training — the foundational knowledge about cognitive strategies that can help ensure children will learn.” 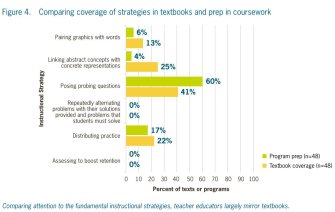 When the six core evidence-based methods were addressed in the 219 courses the researchers assessed, the explanations were severely inadequate, failing to communicate important facts such as the evidence on how spacing learning across time has an incredibly powerful impact on information retention.

None of the textbooks explained that rather than showing how to complete a problem and then letting students get on with it, teaching is far more effective when a teacher repeatedly alternates between allowing the class to solve a problem themselves and then working together through a solution.

The researchers did not mince their words in their summation of the failure of publishers and educators in the discipline of teacher training:

“A textbook purporting to cover instructional design to maximize learning and retention that fails to cover these six strategies is no less remiss than a botany textbook that fails to address photosynthesis or an American government text devoid of a discussion of the three branches of government.”

The report also slammed textbooks and courses for discussing at great length unsupported theories such as “learning styles,” the debunked idea that each child is a visual, kinetic or auditory learner; and that teaching a child in their preferred learning style is more effective. In reality, all children require varied styles of teaching chosen based on the information being taught at the time rather than the child’s personal preference.

The six winning strategies that are neglected among the textbooks: 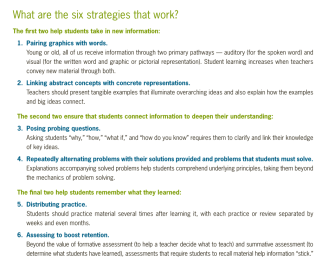 The researchers found that in more than half of the texts, none of the fundamental teaching strategies were even explained: 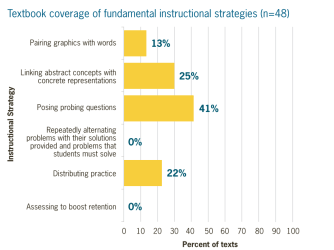 In the rare cases where the strategies were covered, they were often incompletely and incorrectly explained. In one example, a textbook that mentions a core principle — distributed practice — fails to bother to discuss appropriate lengths of gaps between exposures, despite a wealth of evidence in this area. Differing lengths of intervals between teaching result in enormously varied degrees of effectiveness; “appropriate intervals are generally much longer than anyone would guess — weeks or months, rather than days” the researchers explain.

“Looking for the six strategies in these textbooks is akin to looking for six needles in a haystack.”

Ultimately the study found that amongst pages of references “of relatively little merit” listed at the back of textbooks, each textbook barely referenced a single seminal study. If each of the 48 textbooks were to mention the six strategies once there would be a combined total of 288 references, but the total across all of the textbooks was only 118. I find this result deeply worrying because it indicates teachers are being taught by teacher-training textbooks to accept and promote claims without even providing the means to check that information against an original source. The act of effectively searching widely for evidence and then citing the source of that evidence is a crucial part of both teaching and learning, but it appears teacher-training textbooks are failing to do this on a grand scale.

If the conclusions of this damning report are to be believed, then more may be learned from what we have learned from decades of scientific research into education in this short report than in hundreds of pages of teacher training textbooks. Trainee or not, it’s certainly a report every single teacher — and learner for that matter — should read.

Related
Hard Science
Some earthquakes last for seconds, others for minutes — and a few for decades
What do you call it when the Earth shakes for three decades?
Sponsored
What childhood “money story” is shaping your financial behaviors?
Here are the signs that you inherited “money anxiety” from your parents.
The Present
The “maritime Indiana Jones” who salvages shipwrecks now wants to tow icebergs
Simple physics makes hauling vast ice chunks thousands of miles fiendishly difficult — but not impossible.
Neuropsych
Inside the brains of aging dogs
In a citizen science project, thousands of pet dogs are helping scientists to understand what happens to memory and cognition in old age.
Neuropsych
The most common source of awe might surprise you
It’s us.
Up Next
Politics & Current Affairs
The U.S. States Most Dependent on the Gun Industry
Rural states dominate the list of those most dependent on the $43 billion firearm industry for jobs, tax revenue, political contributions, and gun ownership, a fact that could prove decisive for Bernie Sanders this month.