Donald Trump recently made headlines by salvaging a good share of jobs at a Carrier plant in Indiana. Some are hailing the move, others say it sets up a scary precedent, and other still believe it’s just a matter of Trump doing what many governors already do, offering incentives at taxpayer’s expense. Trump is going to have to make a lot of phone calls if he’s going to stop every deal like Carrier’s. And even if he could reach an agreement with them all, most economists agree that the biggest threat to manufacturing jobs isn’t offshoring, but mechanization. In short, manufacturing jobs aren’t coming back.

Mr. Trump recently provided a disincentive, warning of a 35% tariff for those companies relocating jobs overseas. But this won’t be enough to bring back a strong, blue collar middle class. In fact, some experts say renewed protectionism could cause a trade war with China and other countries, which would hurt the US economy. Another fear is that the 35% tax will merely be passed on to the consumer, hurting American families.

Even so, corporations have not been challenged this way by a president in a very long time, not perhaps since Teddy Roosevelt. Trump seemingly isn’t afraid to use the bully pulpit to fight for the American worker, or at least portray himself as doing so. He now has a window of opportunity while corporate America reels from what they thought was a slam dunk in a Trump presidency. He can make a solid impact and put America’s blue collar workforce back on a sustainable path.

$2.1 trillion of corporate profits is currently sitting in offshore tax havens. Mr. Trump on the campaign trail said he would bring back this money by offering a one-time 10% tax, significantly under the 35% corporate rate on the books today. One stipulation, his tax plan doesn’t say what he’ll use it for. Currently, most corporate giants are paying a six percent tax on profits held in offshore accounts.

Wall Street has warm feelings about the repatriation holiday. The return of such cash would spur growth. But it will likely only boost the stock market, rather than the prospects of ordinary American workers, the kind hoping for a return of manufacturing jobs. George W. Bush in 2003 imposed a one year tax holiday on repatriations in what was known as the Homeland Investment Act. A stipulation was that the money had to be used for investments which would create jobs. Ultimately, a tiny fraction of it was ever put toward that end. 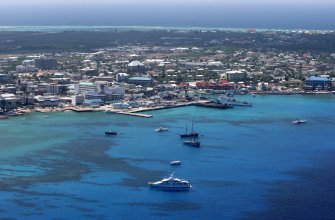 Over two trillion dollars of corporate profits are sitting in tax shelters overseas, such as the Cayman Islands.

Under Trump’s plan, the repatriation holiday would be payable over ten years and bring in $200 billion. A grand infrastructure plan has been proposed. Of course, that needs to happen, as the nation’s bridges and tunnels are crumbling. Targeting infrastructure projects is thought of as an enticement to Democrats who will need to be won over in the almost evenly divided Senate.

Though the politics are there for such a plan, according to Howard Glickman at Forbes, the math doesn’t pan out. Glickman wrote that the same money has been earmarked to help buy down corporate tax rates as well as pay for infrastructure projects, which he calls it a “shell game.” Glickman writes that it can do one or the other, but not both.

Today, ten million prime-age men (25-54) are no longer in the workforce, according to a recent report by White House economists. These are poor men, without a college degree. Sure, there are a few stay-at-home dads, a smidgen are in prison, and others are on disability. But these cases only account for a small percentage of the total.

The US lost six million manufacturing jobs between 2000 and 2010, mostly due to mechanization. Little effort has been made to reincorporate those workers who lost good paying, blue collar jobs. Those positions which have come back after the Great Recession are by and large low-paying.

Most of these men are either unemployed or have given up looking for work. But if they were able to find gainful employment, they could create a massive tax base, while regaining their dignity and restoring their communities. Finding ways to have them improve their station and contribute, and earn a paycheck will fill state and federal coffers. Their increased spending will boost the economy too, as two-thirds of it is consumer-based.

Recently, Johns Hopkins University President Ronald J. Daniels, teamed up with a colleague at the University of Toronto, Michael Trebilcock. The two co-authored an op-ed about the loss of blue collar jobs in America for Bloomberg View. “Washington has never built a robust system to aid those adversely affected” by mechanization, the authors write.

Moreover, the US “…allots far less to retraining, job searches and relocation assistance than other industrialized nations, and U.S. programs are poorly thought out and managed.” Daniels and Trebilcock call for implementing more apprenticeships and making a significant investment in education, particularly lifelong and vocational training. 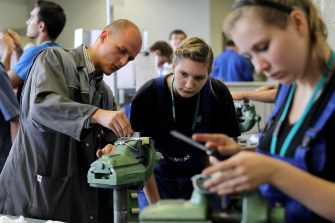 Vocational programs in Germany which include public-private partnerships, have proven very successful.

Though the federal government does have the Trade Adjustment Assistance program, it has been inadequate at best, according to the scholars. Meanwhile, the employment policies of 20 other countries have been proven to reduce unemployment in a cost-effective way. Germany, Switzerland, and Denmark were all noted as having successful programs.

The traits theirs all had in common include: “Aggressively press[ing] workers into training programs, in some circumstances making it mandatory in order to receive other benefits…engineer[ing] flexible opportunities with industry for workers including apprenticeships and short-term training opportunities, [and promoting] part-time opportunities for workers, to keep them in the workforce and their skills sharp while they look for new opportunities.”

These scholars believe the trade-assistance program should be amended. It must include all workers who have been displaced, no matter the reason. According to Daniels and Trebilcock, “In 2014, OECD countries spent about 0.53 percent of GDP on these active labor-market programs. In the U.S., the figure was 0.11 percent, a 30-year low.”

What’s more, they argue that the US could reduce unemployment by one percent for every $43.7 billion it spent on an employment program. The infrastructure project is estimated to cost $167 billion. What if the remaining $33 billion were used to fund a well-designed federal employment program?

The nation needs more engineers for instance, and some of these positions can be filled by a worker with an associate’s degree. It also requires more pipe-fitters, carpenters, electricians, and petroleum workers. Some employers say that there are plenty of jobs, but few qualified applicants. A new nationwide retraining program along with public-private partnerships could be the answer.

The government should use this repatriation money to train people in depressed areas, especially rural America and the inner city, for jobs with a future. Funds can also be used to provide interest free student loans to help workers gain the credentials they need for the jobs that are in demand today, but employers find hard to fill.

To learn about the middle skill jobs available in the US click here:

It turns out it’s hard to make work at an Amazon warehouse fun.
Up Next
Surprising Science

Spontaneous talk on surprise topics. Author, Podcaster, and “Human Guinea Pig” Tim Ferriss on death, ignoring most of the news, and sake as a secret weapon for podcasting.