The arrest of the alleged Golden State Killer, Joseph James DeAngelo, was notable not just for the capture of an elusive monster after decades of futile searches, but also for DeAngelo’s occupation. The killer—also known as the East Area Rapist, the Original Night Stalker, the Diamond Knot Killer and Visalia Ransacker—managed to avoid getting caught for years while being likely responsible for 12 murders and almost 50 rapes in the 1970s and ’80s. How did he not get caught for such a long time? By living and working in plain sight as a police officer.

As writes professor Michael Arntfield, who teaches Criminology & English Literature at Western University, there have been other famous killers who had very reputable professions.

Canadian “Colonel” Russell Williams, who got two life sentences for multiple murders, sexual assaults and burglaries, was a commander of a major Air Force Base.

Jeffrey Dahmer raped, killed, and dismembered 17 men and boys. Already a murderer, he worked for a while at a chocolate factory in Milwaukee.

Tom Steeples, who killed several people, was a computer store owner and prominent businessman in Nashville.

Ted Bundy, convicted of ruthlessly killing 30 people while being probably responsible for many more, had a job while already a murderer at Seattle’s Suicide Hotline Crisis Center. He followed that up by working on the re-election campaign of the Republican governor of Washington Daniel J. Evans. 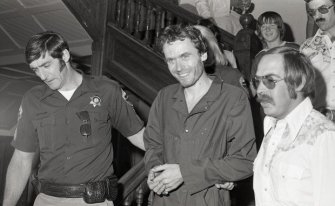 Taken as a whole, certain patterns emerge in the occupations chosen by serial killers, with some full-time and part-time jobs over-represented, says Arntfield. Of course, just because terrible people had these jobs that doesn’t mean everyone associated with them is somehow on the path to becoming a killer. Still, here are the top jobs for serial killers, broken down by their skill level:

What about these jobs appeals to serial killers? Arntfield says sometimes these occupations facilitate opportunities for the killers’ desire to kill but ultimately, it’s a complex interplay of factors.

“[It’s a] combination of mobility, power (whether structural or actual), and the fact many jobs also simultaneously satisfy the underlying paraphilias, or sexual preoccupations, that also fuel killers’ crimes,” said Arntfield in an interview with IFLScience.

One commonality between some of the jobs is that they provide an access to vulnerable victims, like travelers, sex or shift workers.

According to an Oxford University psychologist, the top 10 jobs for psychopaths are:

More details about the occupations of various killers can be found in Michael Arntfield’s recent book, Murder in Plain English.

Related
Life
Scientists use CRISPR to insert an alligator gene into a catfish
Disease kills off 40% of farmed catfish. This gene protects them.
Neuropsych
How you breathe affects your brain
Your breathing rhythm influences a wide range of behaviors, cognition, and emotion.
Health
What happens when regular porn watchers abstain for a week?
Researchers watched for signs of withdrawal — but didn’t find any.
Neuropsych
Daily caffeine intake temporarily alters your brain structure
Compared to people who took a placebo, the brains of those who took caffeine pills had a temporarily smaller gray matter volume.
Thinking
Why you should laugh at yourself, according to Seneca and Nietzsche
“It is more human to laugh at life than to lament it.”
Up Next
Starts With A Bang
When Will We Break The Record For Most Distant Galaxy Ever Discovered?
The current record-holder is a doozy, and right at the limit of what Hubble can do. But there’s even more out there.The greatest advances in science often come when we first […]