“I am aware of the hazards. I want to do it because I want to do it. Women must try to do things as men have tried. When they fail, their failure must be a challenge to others.” — Amelia Earhart prior to her final flight. 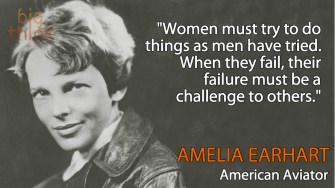 I’ve always been struck by the depth of this quotation. Without downplaying its innate feminist tone (because that’s important), Earhart’s words speak to a universal essence of achievement. Her words imply that success is rarely singular, that no man or woman is ever alone in victory. This is because accomplishment is a byproduct of process and cycles. The climbing of Everest wasn’t just Norgay and Hillary’s triumph, but the culmination of the work and bravery of all those who had tried before and failed (not to mention those who assisted in more pragmatic ways). This idea is similar to the famous words of Isaac Newton: “If I have seen further it is by standing on the shoulders of giants.”

Our awareness of Earhart’s fate during her final journey lends her quotation a greater magnitude now than when she first wrote it. What’s clear in Earhart’s message is that her failure to circumnavigate the globe, tragic as it was, made way for another woman to be the first. It’s a powerful perspective on failure as stepping stone, since Earhart’s death became a challenge to other women to finish what she started. It’s also a fascinating endorsement of collective accomplishment versus individual achievement. Neil Armstrong’s first words on the moon echo this sentiment: “One small step for man, one giant leap for mankind,” as opposed to “One small step for Neil Armstrong, also one giant leap for Neil Armstrong… suck it, Aldrin.”

Contemporary examples of this idea are prevalent. For example, I can’t help but consider the recent media hoopla over the women who washed out of U.S. Army Ranger school. Their failure must similarly be taken as a challenge for others. They did not fail their sex by missing the mark. Rather, their effort began construction on a stepladder that will support those who follow in their footsteps. Someday a woman may very well pass through the arduous Army Ranger training process. Her accomplishment in being the first will likewise belong to those giants below her.

This idea can similarly be applied to most of the people we exalt as the world’s major successes. Elon Musk’snot-really-a-car company wasn’t named after Nikola Tesla for nothing. Steve Jobs, a prickly egomaniac, still acknowledged that Apple’s greatest asset was its team of developers. So many scientific endeavors and discoveries were made possible thanks to decades of work by people who didn’t live long enough to see their achievements realized. Think about Bill Nye’s LightSail satellite experiment, which Bill is never hesitant to remind people really isn’t his experiment. It’s Carl Sagan’s and Bruce Murray’s and Lou Friedman’s and all the other folks who first thought it up 40 years prior at Jet Propulsion Laboratories. Nye’s achievement is their achievement too.

Of course, buying into this idea requires a very humanistic worldview. We seek to reach for the stars not merely for ourselves, but for all mankind.

If there are two ways of thinking about success — individual and collective — what I’m talking about is the latter (even though “individual” success is something of a misnomer considering what’s been discussed above). For the betterment of humanity, as well as the exaltation of knowledge and ideas, it’s vital we remember why we pursue success and to whom we owe our major breakthroughs. That’s the refrain echoed by Amelia Earhart, Bill Nye, Elon Musk, and millions more who have tasted the fruits of success and knew from where the seeds were sown.

Photo credit: Getty Images / Staff
Related
13.8
The weirdness of quantum mechanics forces scientists to confront philosophy
Though quantum mechanics is an incredibly successful theory, nobody knows what it means. Scientists now must confront its philosophical implications.
Neuropsych
Why is a Starbucks loyalty rewards program making customers so angry?
The rewards price to get a free cup of hot coffee at Starbucks is going up.
Empowering growth
7 essential management training topics for every team leader
From emotional intelligence to problem solving, these management training topics will set team leaders up for success.
Thinking
What if you could rewire your brain to conquer suffering? Buddhism says you can
For Buddhists, the “Four Noble Truths” offer a path to lasting happiness.
Hard Science
Solved: 500-year-old mystery about bubbles that puzzled Leonardo da Vinci
The solution involves the infamous Navier-Stokes equations, which are so difficult, there is a $1-million prize for solving them.
Up Next
Words of Wisdom
When One Woman Fails, Thousands Must Challenge Themselves to Achieve
Words of Wisdom from Amelia Earhart prior to her final flight: “I am aware of the hazards. I want to do it because I want to do it. Women must try to do things as men have tried. When they fail, their failure must be a challenge to others.”