I’ve always believed in science. Alien abduction shows scared me far more than horror movies as a child. Even as a teenager, when my friends and I found ourselves in an abandoned house, with candles spread all around, playing with the Ouija board to summon the spirits said to haunt the place, I drew odd looks, when I mentioned that anything made by Hasbro couldn’t possibly contact the dead. I ended up whispering quietly with a scant few in the corner, until the “séance” was finally over.

To this day, I hear occasional stories about the supernatural happenings which occurred that night. Candles blew themselves out supposedly, and a cup flew across the room. Usually, the storyteller avoids my face, for fear I’ll roll my eyes. Of course, if you sit before a Ouija board and place your fingers on the slider (or planchette), the eerie thing seems to move all by itself.

That surprising sensation shuts off our logical mind, shifting instead to the older, reptilian one, which is where fear and surprise derive. We feel those emotions strongly. But the truth is, there is no ghost pulling the strings. Instead, it all works on a scientific principle known as the ideomotor effect. British physiologist William Benjamin Carpenter first discovered it in 1852.

This is the body moving all by itself. If you’ve ever felt your knee jerk in the middle of the night, in medical terminology a hypnic jerk, you know the feeling. But it’s more shocking when you’re wide awake and conscious of the fact. So when you and your friend place your fingers on the planchette, your unconscious mind tells your body to move, even though your conscious mind is completely unaware of it, making it feel as if you’re possessed. 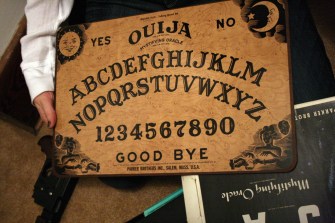 Typical Ouija board. Bought by Parker Bros. in 1966, Hasbro games sells them today.

Another place you can see this effect is when you take an object, like a ring or button and hang it on a piece of string. Make sure the string is at least a foot long. If you dangle it out in front of you, gripping the string by the end, instead of remaining steady, you’ll notice that it makes tiny circles, either clockwise or counterclockwise, as the case may be, even though you believe you’re holding it straight. You’re simply unaware of the subtle movements your body is making. This circular motion is called Chevreul’s Pendulum, after its 19th French chemist who discovered it.

That part of the brain which causes unconscious movement isn’t connected to the part that registers body movements. That’s according to the late psychologist Daniel Wegner, author of the book, The Illusion of Conscious Will. Dowsing rods and magical pendulums operate on the same principle.

One interesting thing is, the more you believe you aren’t doing it, the stronger your subconscious will react. But don’t use that as evidence of supernatural interference. Some experiments had users work the Ouija board blindfolded. The participants were more likely to spell out incoherent messages when robbed of sight.

Despite being debunked, the Ouija board has a remarkable history, with the earliest versions popping up in China in the 300s CE and in Europe by the 400s. It’s first appeared in America was in 1891, a time when the country was alight with spiritualism. Séances were in fashion, as was mind-reading, clairvoyance, and “second sight.” Today, some groups believe the Ouija board can be a conduit to the dead, or even let the devil out. 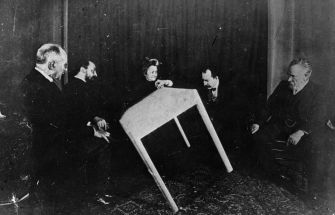 Table-tipping, a kind of séance popular at the end of the 19th century.

Though unable to reach beyond the grave, the Ouija board may be a good tool to probe the subconscious, according to a 2012 study. Here, researchers at the University of British Columbia found that when asked random questions directly, participants answered right about 50% of the time. But when they, in turn, asked the Ouija board, they were correct 65% of the time. Docky Duncan was a researcher on this study, and is part of UBC’s Visual Cognition Lab.

He said it appeared that people may have a “second intelligence” they aren’t aware of, but which resides deep within their subconscious. You could ask the capital of Nebraska, for instance. The person may not know. But they might have heard it somewhere, and the answer got lodged deep inside their brain.

The state you’re in when using an Ouija board could perhaps allow deep-seated memories to surface. Researchers believe this may help them develop novel treatments for psychiatric disorders, as well as Alzheimer’s, and other neurodegenerative diseases. It seems the Ouija board can perform some sort of magic, as a medium to the mysteries of our brain and subconscious, rather than of the great beyond. Just don’t tell my friends that.

To see a small TV experiment surrounding the Ouija board, click here:

“The digital HQ – the digital infrastructure that supports productivity and collaboration – actually became more important than the physical HQ.”
Up Next
Technology & Innovation

Why Boston Dynamics’ New Robot Scares the Crap out of Us

Handle, the latest robot from Google-backed Boston Dynamics, elicits both excitement and anxiety. The company’s founder has described it as “nightmare-inducing.”